In August and September, we’re taking on industrial Baltimore with tours of manufacturing facilities old and new at Parker Metal Decorating and Fashions Unlimited. We’re also resuming our tours of the catacombs and 100-year vendors at Lexington Market, and will host the first of our fall lectures at the Garrett-Jacobs Mansion. Please carve out some time and join us!

On the morning of September 13, we’re going back to see modern garment manufacturing in action at Fashions Unlimited. Our tour there last year was so popular that we’re repeating it to see how Made In America is happening here in Baltimore in the form of swim suits, Mt. Everest climbers’ parkas, and European League soccer jerseys.

On Saturday September 14, we’re resuming our monthly tours of the catacombs and 100-year merchants at Lexington Market. If you can’t make it on this tour, we’ve lined up additional tours through December!

We’ve also finalized our fall lecture series in partnership with the Garrett-Jacobs Mansion. We’ve got four fabulous authors and historians lined up:

And finally, our Sunday morning Monumental City tours are rolling along. The next tour is this Sunday (August 4), where we’ll leave from the Sunday Farmers Market on a one-hour walking tour to explore downtown landmarks and lions.

Happy summer, and we hope to see you sooner AND later.

It’s July in Baltimore and it’s hot. That’s not new. What is new are two upcoming heritage tours visiting a 100 year old family business and exploring parts of Downtown many of us never knew about. Please join us!

On Thursday July 25, we’re going behind the scenes at Rheb’s Candies to see how they produce their delectable sweets at this 101 year-old business that is still going strong in the Rheb family. The production facility is in the family’s former garage next to their house-turned-shop and here we’ll get an intimate tour of perhaps the sweetest place in Baltimore.

Did you know that the Continental Congress met in downtown Baltimore? Or that German agents plotted sabotage on Charles Street during World War I? If you didn’t (and even if you did!) join tour guide Jefferson Gray on Sunday July 28 for a walking tour of The Downtown You Never Knew to learn about Baltimore’s hidden history in plain sight.

We are still rolling through our Sunday morning Monumental City walking tours. The next tours are of Jonestown and the Shot Tower on July 14 and Mt. Vernon Place and the Washington Monument on July 21. Come out and bring a friend!

Finally, looking ahead to the fall, we are pleased to be continuing our partnership with the Garrett Jacobs Mansion in a series of Sunday afternoon lectures. We just opened up registration for the first talk on September 15 with historian Charlie Duff on his new book “The North Atlantic Cities” exploring rowhouses around the world. We hope to see you there!

Our upcoming tours give you an insider’s look at one of the most talked about projects in Baltimore, let you step into an often overlooked gem at the Maryland Zoo and tell the love stories of Mount Vernon. We are also bringing back our popular Monumental City tours on Sundays from April to November!

On April 14, our Port Covington tour offers a behind-the-scenes tour of the City Garage and a chance to talk with Sagamore Development about their vision for the future of South Baltimore. Originally developed in 1904 around the end line of the B&O Railroad, the Port Covington area is today poised to become Baltimore’s largest urban redevelopment project.

For our Maryland House tour, Tony Azola of the Azola Companies and Lori Finkelstein of the Maryland Zoo will guide you through an architectural gem located just next to the Rogers Mansion. The Maryland House was built for the 1876 Centennial Exhibition in Philadelphia and then rebuilt on the Zoo grounds. Special thanks to Preservation Maryland for co-hosting this tour! We also will hold our Mount Vernon Love Stories tours (rescheduled from a very cold Valentine’s Day weekend) on April 9 at 11:00 am and 1:00 pm.

Finally, our Monumental City tours return starting April. These tours are a great way to explore Baltimore on Sunday mornings. Join us for as we explore Jonestown and the Shot Tower (1st Sunday); Landmarks and Lions Downtown (2nd Sunday); Mount Vernon and the Washington Monument (3rd Sunday); and the Patterson Park Observatory (4th Sunday).

As a participant in the Blue Star Museums program, first launched in the summer of 2010, we are proud to offer free admission to all active duty military personnel and their families for Looking Up Downtown walking tours from now through Labor Day, Monday, September 3. On this 75-minute guided walking tour, everyone from first-time visitors to Baltimore to born-and-raised locals can learn something new and surprising about the architecture and history of downtown Baltimore.

The route – less then one mile and stroller friendly for families with small children – winds through the grounds of the Zion Lutheran Church, continues past a few enduring local landmarks like the Alex Brown & Co. building that still bears the scorch marks from the Great Baltimore Fire of 1904. the and ends right back where it started at the Baltimore Farmer’s Market. All Looking Up Downtown! Gargoyles & More walking tours start at 9:30am on the first and third Sunday from April through November. Meet at the Baltimore Farmers’ Market in front of the Hollywood Diner at North Holiday and South Saratoga Streets. RSVP to join us this weekend or stay tuned to check out another tour later this year!

Don’t forget to check out other local history museums participating in the Blue Star Museums program this summer! In Baltimore, along local museums and historicsites include:

Blue Star Museums is a collaboration among the National Endowment for the Arts, Blue Star Families, the Department of Defense, and more than 2,000 museums across America. Leadership support has been provided by MetLife Foundation through Blue Star Families. 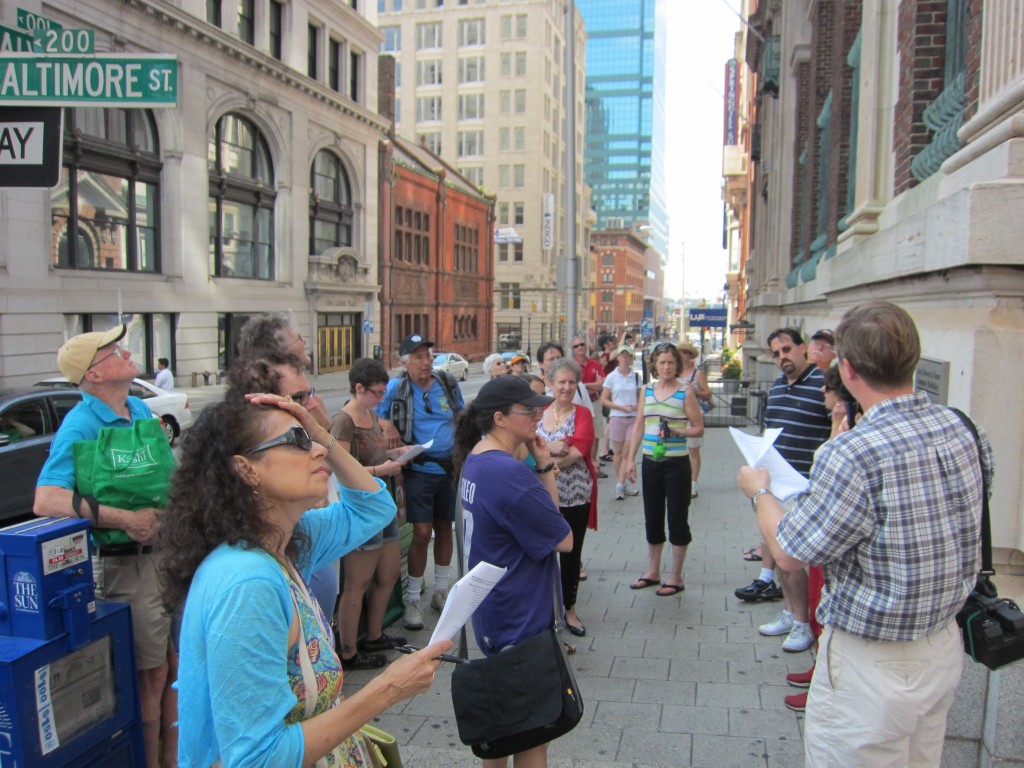