Idlewylde: A Community on the City Line (Virtual Talk)

Idlewylde, a community of more than 700 homes situated on the Chinquapin Run and Herring Run-B watershed, is the oldest of the suburban neighborhoods of South Towson. The community has a mix of housing styles characteristic of the development of suburban neighborhoods during the time of its growth, ranging from 1920s bungalows and small Cape Cods to brick Colonials and Mid-Century Modern designs. Come learn of this as well as celebrate the heritage of this unique community as shared by two Idlewylde community members who will be available to answer participants’ questions after the presentation. 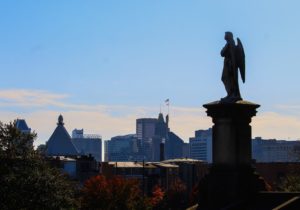 Baltimore Heritage has inherited the Green Mount Cemetery tour from the great Baltimore historian Wayne Schaumburg and we invite you to join us. Opened in 1839, Green Mount is an early example of an urban-rural cemetery, that is, a cemetery with a park-like setting located close to the countryside. Green Mount is the final resting place of some of Maryland’s most famous, and infamous, figures including Johns Hopkins, Enoch Pratt, William and Henry Walters, Mary Elizabeth Garrett, Betsy Patterson, A.S. Abell, John H. B. Latrobe, A. Aubrey Bodine, John Wilkes Booth, and Elijah Bond, who patented the Ouija Board! Join us to tour Baltimore’s historic Green Mount Cemetery. 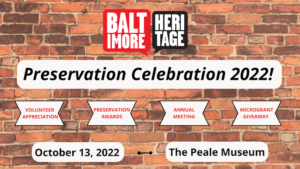 Join us for our Preservation Celebration 2022 at the newly restored and re-opened Peale Museum. On October 13, we’ll honor our 2022 Preservation Award winners and, with your help, give out four micro-grants to people working on the front lines in our historic neighborhoods. We’ll say thank you to our volunteers and honor all of their hard work this year. This gathering also acts as Baltimore Heritage’s annual meeting where the board will elect its new members. With food from Baltimore vendors, wine and beer from Maryland suppliers, and complimentary valet service, we hope you will join us for what promises to be a wonderful evening. And we couldn’t be in a better historic place than the newly renovated Peale Museum. We hope you’ll join us! 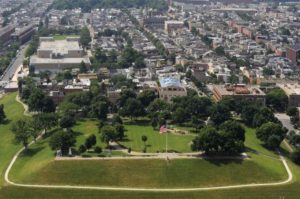