Thanks to Steve Earley for sharing these great photographs of our Barclay by Foot tour led by Jenny Hope from the Telesis Corporation! Enjoy his whole set on Flickr and get inspired to join us for another upcoming Baltimore by Foot walking tours this spring. 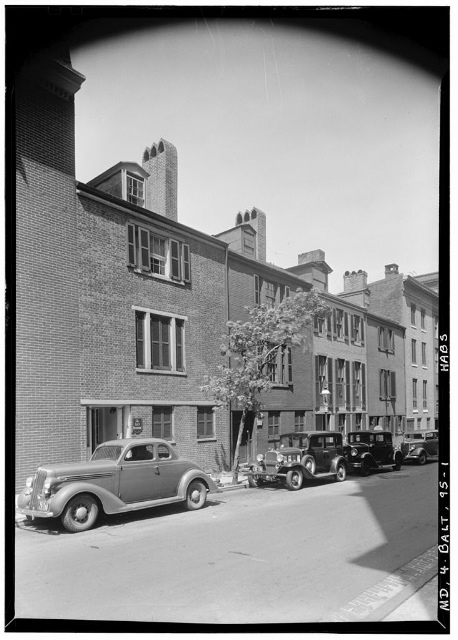 Established in 1925, the Hamilton Street Club occupies a pre-1820 townhouse in a row designed by early Baltimore architect Robert Carey Long, Sr. – also the architect for the Peale Museum and Davidge Hall. Among Baltimore’s private social clubs, Hamilton Street has a reputation for both intellectual conversation and irreverence. It is a place where, as Francis F. Beirne recounted in The Amiable Baltimoreans, “anybody could say what he pleased and talk as long as he pleased but nobody was required to listen.”

The club’s popularity among by local writers, as well as journalists and editors from the Baltimore Sun, led long-time club president and owner of the Victor G. Bloede Chemical Co. William W. Woollcott to remark, “Here I am, the only businessman in the club, surrounded by parasites.” Join us at the club on May 31 for food, drinks and great conversation with fellow preservationists, including a chance to meet a few of the club’s long-time members.

Work up a thirst before the happy hour with a quick stroll through the history of private social clubs in Mt. Vernon. On a short walk from Mt. Vernon Place to the happy hour, we’ll share stories of Confederate sympathizers, tireless social reformers, and the most serious of university scholars from the neighborhood’s private social clubs from past and present. The tour begins at 6:00pm in the north park of Mt. Vernon Place by Charles and Madison Streets.

Thanks to William M. Dunn, Master in Chancery of the Circuit Court for Baltimore City for contributing a guest post on the history of Baltimore’s Clarence Mitchell, Jr. Courthouse. William Dunn and a generous group of volunteers welcome visitors to the Courthouse most weekdays from noon to 1:00pm at the Museum of Baltimore Legal History. Stop in and pick up the museum’s new self-guided walking tour brochure (also available to check out on Facebook or at the Baltimore Bar Library) by Master Dunn and his colleague James Schneider, Judge for the U.S. Bankruptcy Court for the District of Maryland. Small group tours may be available on request – contact William Dunn at 410.396.3304 or william.dunn@mdcourts.gov for more information. 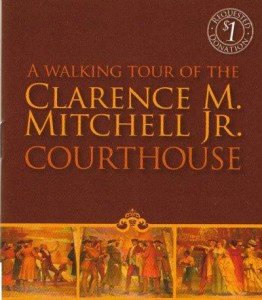 In 1885, Baltimore City set out to build the most beautiful Courthouse in the country. Fifteen years, and $2.2 million later ($56 million adjusted for inflation), that goal was realized. On January 6, 1900, the Baltimore Sun reported that the City of Baltimore had built a “temple of justice, second to no other in the world.” The building, which is a magnificent exemplification of Renaissance Revival architecture, continues to stand as a monument to the progress of the great city of Baltimore, and to the importance of the rule of law.

Today, this main building in the Baltimore City Circuit Court complex is referred to as the Clarence M. Mitchell, Jr. Courthouse in honor of the local lawyer and nationally respected civil rights leader. Most of the original splendor of this massive building can still be enjoyed, including the granite foundation, marble facades, huge brass doors, mosaic tiled floors, mahogany paneling, two of the world’s most beautiful courtrooms, domed art skylights, gigantic marble columns, and beautifully painted murals. In addition, the Courthouse is home to one of the oldest private law libraries in the country, and to the Museum of Baltimore Legal History.

The exterior foundation of the Clarence M. Mitchell, Jr. Courthouse was built from granite quarried in Howard County, while the exterior walls are crafted from white marble quarried in Baltimore County. The Calvert Street exterior façade is especially outstanding, as it displays eight of the largest monolithic columns in the world, each weighing over 35 tons and measuring over 35 feet in height. The interior of the building is even more impressive. Among the many historic spaces, the Supreme Bench Courtroom is one of the finest. The circular courtroom is like no other in the world. It is surmounted by a coffered dome resting upon sixteen columns of Sienna marble from the Vatican Quarry in Rome. Inscribed upon the frieze around the base of the dome are the names of Maryland’s early legal legends.

Other fascinating rooms include the Old Orphans Courtroom (which houses the Museum of Baltimore Legal History); the Ceremonial Courtroom, and the Bar Library (described as one of the most elegant interior spaces in Baltimore, with its paneled English oak walls and barrel-vault ceiling punctuated by forty art glass skylights).

Also noteworthy for its artistic beauty are the two domed stained-glass skylights above the stairs in Kaplan Court which depict the goddesses of Justice, Mercy, Religion, Truth, Courage, Literature, Logic and Peace. In addition, the courthouse has six original murals from world renowned artists depicting various civic and religious scenes. Those murals include: Calvert’s Treaty with the Indians; The Burning of the Peggy Stewart; Washington Surrenders His Commission; Religious Toleration; The Ancient Lawgivers; and The British Surrender at Yorktown.

Camden Yards, home to the Baltimore Orioles, is much more than a ballpark. When the park first opened as the new home of our Baltimore’s baseball team in 1992, the buildings had already served the people of Baltimore for over 130 years. Many of us have visited Camden Yards on game day amid the crowds of enthusiastic sports fans. Here is a chance to see the ballpark at a quieter time and to visit places that are not typically open to the public. Our tour will include the dugout, umpires tunnel, press box, club level, and the JumboTron control room. We will hear about the history of baseball in Baltimore while gaining an appreciation for all that goes into making a home for a great team like the Orioles.

Behind the Scenes Tour of Camden Yards
Saturday, March 9, 10:15 am or
Sunday, March 24, 12:30 pm
333 W. Camden Street, Baltimore, 21201
RSVP Today!  $15 members | $25 non-members
Parking is available at lots B & C located between Oriole Park and Ravens Stadium for a fee or visit the MTA website for details on transit options.

The history of Camden Yards began in 1855 when the B&O Railroad started construction on Camden Station. The iconic B&O warehouse  that frames the west side of the stadium today was built between 1899 and 1905. The warehouse is over eight stories tall and over 1,100 feet long – large enough to hold the freight from 1,000 railroad cars. The station remained in active use by the B&O’s passenger trains until the 1980s making it one of the longest continuously operated railroad terminals in the United States. The building has gone through many changes since its original design of a castle-like façade to today’s ballpark. Today, Camden Yards and Camden Station are a nationally known success story for adaptive reuse and a great place to catch a game!

Last week, the Baltimore Business Journal published a report prepared for Baltimore City by a real estate consulting firm recommending various options for seventeen historic buildings owned by Baltimore City. When the City first commissioned this report last spring, it prompted widespread concern over the future of much-loved landmarks like the Shot Tower, Peale Museum, and Cylburn Mansion. At the time, we called for an open process that would ensure a seat at the table for the many citizens and volunteers who for decades have protected and celebrated these important landmarks. Now that the consultant’s report is final and the City has begun considering options for the seventeen buildings on the list, we believe the need for an inclusive deliberation is paramount to ensure the sites under consideration can be preserved and remain assets for Baltimore.

We commend Baltimore City for focusing on the seventeen historic properties subject to the report, some of which are in desperate need of repair. Long term leases, money-generating tenants, and perhaps even outright sale should be considered for some of the sites. Many others on the list, however, have friends groups that have cared for them for years (decades in some instances), that have raised money for their maintenance and restoration, and that are current and active in their work. Clifton Mansion, the Shot Tower, Carroll Mansion, and the Crimea are prime examples in this category. Still others, including the Peale Museum, Roland Park Water Tower, and President Street Station, have groups actively working with the City to gain control and begin restoration. The people who have devoted themselves to the buildings on the list should be part of the decision-making process. The consultant’s report appears to leave out the time, money, and dedication that Baltimoreans have already put into these landmarks and to undervalue their potential for the future stewardship of these historic places.