Historic preservation in Station North has been in the news recently with historic tax credits awarded to the former Centre Theater in January and the announcement in December that the long-neglected Parkway Theater will be the new home for the Maryland Film Festival. We asked Charlie Duff, Executive Director of Jubilee Baltimore and the developer of the Centre Theater to share his thoughts on the exciting progress of preservation in Station North.

If you visit North Avenue during the day, you might think it hasn’t changed for years; it’s just a big rundown street. At night, however, North Avenue is starting to be a happening place, a focal point of Baltimore’s emerging Station North Arts and Entertainment District. Like Fells Point, Station North is livelier by night than by day.

Long known for the Charles Theater – and not much else – Station North is now home to several dozen restaurants, galleries, and venues for music, arts and theater. It’s busy every night and hopping on weekends, and the Station North music scene led Rolling Stone to name Baltimore the best Indie music scene in the country. But it’s not just a scene. It’s also a neighborhood and a part of Baltimore’s economy. More than 700 artists live and work in Station North right now. They’re young and vigorous, and they think Baltimore City is the greatest place on earth.

Station North may not look like a great historic district, but it is becoming a great place. It wouldn’t be happening at all without cheap, wonderful buildings and historic tax incentives. Take a walk down North Avenue and recharge your Preservation batteries. Preservation works! 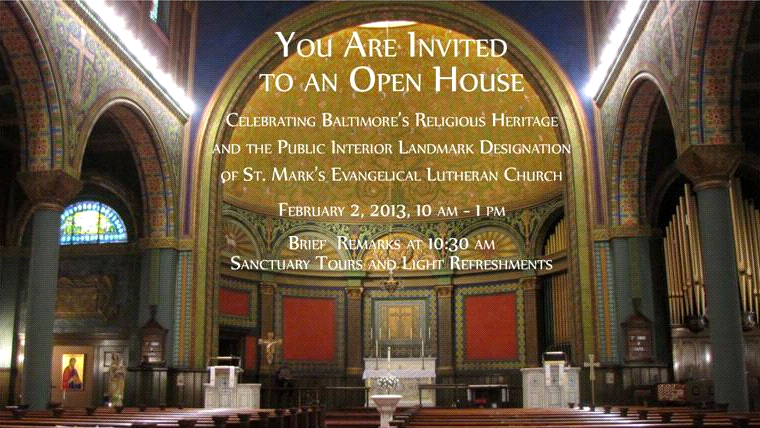 While several churches and residences in Baltimore have Tiffany stained-glass windows, St. Mark’s Evangelical Lutheran Church is the only building with a Tiffany interior. Louis Comfort Tiffany was one of America’s most famous interior designers and artists of the late 19th – early 20th century. Today, he is best known for his stained-glass. Built in 1898, St. Mark’s (featured on Explore Baltimore Heritage) is one of only a few intact Tiffany-designed interiors left in the world. The Tiffany Glass and Decorating Company designed and produced the ornately decorated walls, mosaics, stained-glass windows, and lamps in the church.

Along with celebration the designation of St. Marks and celebrating Baltimore’s religious heritage, we’re also hoping this event will encourage other religious institutions to consider landmark designation, particularly interior designations.

The open house is hosted by St. Mark’s Evangelical Lutheran Church and the Commission for Historical and Architectural Preservation (CHAP). For questions or to RSVP, please contact Lauren Schiszik, CHAP staff at lauren.schiszik@baltimorecity.gov or at 410-396-5796. 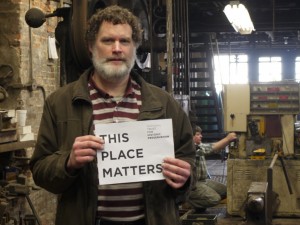 G. Krug & Son is an institution on Downtown’s West Side with over 200 years of history in forging and restoring ironwork across the City of Baltimore. We’re excited to share the news that the shop has now opened a museum to share their rich history launching with a free open house this Saturday!

This is a business that literally built Baltimore into the city it is today and the pieces of the jobs worked on in the shop’s 202-year history can still be found inside. Artfully done drawings, photographs, and job files containing the names of some of the city’s most influential people and institutions are all featured in the new museum. Peter Krug started the museum to showcase a history of Baltimore and a family owned company that has been there for much of that time and share their unique perspective on the historic port city that supported a fledgling country. G. Krug & Son employees will lead tours from 11:00am to 2:00pm and offer demonstrations of the blacksmithing process. 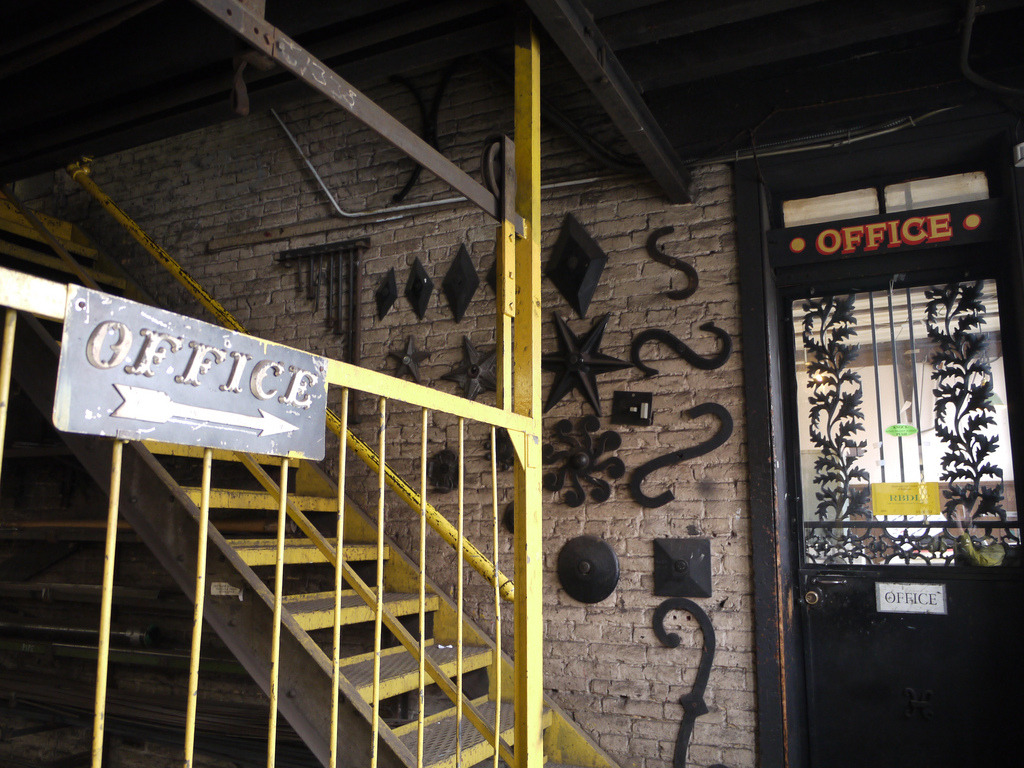 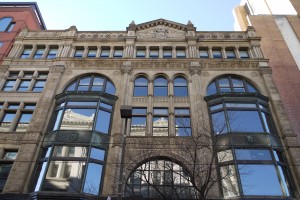 Baltimore residents of all backgrounds remember the bustling shops of Howard and Lexington Streets but a handful of Jewish-owned businesses – Hutzler’s, Hecht’s, and Read’s Drug Store just to name a few – stand out in stories and memories from the history of downtown’s west side. Bring your camera and join Baltimore Heritage for a free photo walk and tour exploring the history of Jewish entrepreneurs and workers – making clothes, selling furniture, and more – who made Howard and Lexington a place to remember.

October 27, 2012, 10:00 am to 12:00 pm
RSVP today or sign up on Facebook! Free thanks to Free Fall Baltimore.
Meet at the east entrance to Lexington Market – Eutaw and Lexington Streets

This tour is presented in partnership with the Jewish Museum of Maryland for the Jewish Landmarks Photo Competition. Special thanks to The Baltimore Sun for featuring our tour on the Darkroom blog.

We deeply appreciate the support of our donors who make Free Fall Baltimore possible.  Special thanks goes to Susquehanna Bank, The Abell Foundation and the National Endowment for the Arts, with additional support provided by American Trading and Production Corporation, William G. Baker, Jr. Memorial Fund, and the Henry and Ruth Blaustein Rosenberg Foundation.

Urban renewal shaped the landscape of Baltimore in tremendous ways during the 1950s and 1960s – fundamentally transforming historic neighborhoods from Mount Vernon to Bolton Hill. We’ll be riding and walking through this fascinating history with two great programs – a happy hour and a free walking tour around State Center on Friday, August 24 followed by a morning bike tour on Saturday, August 25 across nearly all of central Baltimore. Both our tour and happy hour are organized in partnership with Bikemore – Baltimore’s new bike advocacy organization.

Our regular Preservationist Happy Hour is back in Mt. Vernon at Doughterty’s – a great neighborhood pub with fifteen beers on draft, seasonal specials, and happy hour beer specials. If you’re looking for something to eat, they have a classic bar menu with burgers, sandwiches and more. We’re also offering a preview of our Urban Renewal by Bike tour with a free 45-minute walking tour through State Center – a complex of government offices built from the 1950s through the 1970s and one of the city’s largest urban renewal projects.

Saturday, August 25, 9:30 am to 12:00 pm
RSVP today! $10 per person.
Meet at Mount Vernon Place in the west park between Charles and Cathedral Streets.

Ride along for a tour of the city’s best brutalist buildings, modern apartment towers, and more as we explore the history of post-WWII urban renewal efforts from Mount Vernon Place to State Center. Of course, even in the 1960s preservationists fought to preserve historic buildings, so we’ll also get to take a look at once-threatened landmarks from the Garrett-Jacobs Mansion to the Shot Tower.

A History of Poppleton (Virtual Talk)