Last week, the Baltimore Business Journal published a report prepared for Baltimore City by a real estate consulting firm recommending various options for seventeen historic buildings owned by Baltimore City. When the City first commissioned this report last spring, it prompted widespread concern over the future of much-loved landmarks like the Shot Tower, Peale Museum, and Cylburn Mansion. At the time, we called for an open process that would ensure a seat at the table for the many citizens and volunteers who for decades have protected and celebrated these important landmarks. Now that the consultant’s report is final and the City has begun considering options for the seventeen buildings on the list, we believe the need for an inclusive deliberation is paramount to ensure the sites under consideration can be preserved and remain assets for Baltimore.

We commend Baltimore City for focusing on the seventeen historic properties subject to the report, some of which are in desperate need of repair. Long term leases, money-generating tenants, and perhaps even outright sale should be considered for some of the sites. Many others on the list, however, have friends groups that have cared for them for years (decades in some instances), that have raised money for their maintenance and restoration, and that are current and active in their work. Clifton Mansion, the Shot Tower, Carroll Mansion, and the Crimea are prime examples in this category. Still others, including the Peale Museum, Roland Park Water Tower, and President Street Station, have groups actively working with the City to gain control and begin restoration. The people who have devoted themselves to the buildings on the list should be part of the decision-making process. The consultant’s report appears to leave out the time, money, and dedication that Baltimoreans have already put into these landmarks and to undervalue their potential for the future stewardship of these historic places. 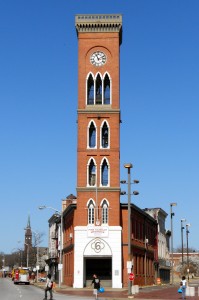 Which is older, Old Engine House No. 6 or the Baltimore City Fire Department? If you picked the firehouse you would be correct. Completed in 1853, this venerable fire station predates the Baltimore fire department by four years. It is located on Gay Street in the Jonestown neighborhood and was built not for Baltimore City but for the Oldtown Independent Fire Company. In its day, this fire company would fight battles with rival companies over who would have the honor of putting out a blaze, a practice that helped give Baltimore its notorious name, “Mobtown.” In addition to its age, the building boasts notable architecture, especially its 103-foot Italianate-Gothic tower that was copied from Giotto’s campanile in Florence, Italy.

On the inside, Engine House No. 6 was home to a steam engine named, appropriately, the “Deluge,” that weighed 8,600 pounds. During the great 1904 Fire, teams from the firehouse helped pump water from the Jones Falls to prevent the fire from jumping the river and destroying East Baltimore, and also operated as a sort of field hospital for injured firemen. In 1960 Baltimore’s Fire Board recommended razing the tower because it had outlived its usefulness. The tower and the station, however, hung on in active use until 1976 when the building closed as a municipal fire station and transformed into the Baltimore Fire Museum. Today the building is included on the list of landmarks that the city is evaluating with regard to use and ownership. Please join us on a tour this wonderful historic space and its rich collection of artifacts to learn about this fascinating part of Baltimore’s history.  We will have the honor of our tour being lead by Deputy Chief/Fire Marshal Raymond C. O’Brocki who will share his research on the firehouse.