We’re throwing a party on Tuesday, October 2, 2018 and you are the reason for the celebration. This is our third year hosting a heartfelt thank you event for the many people who volunteer, participate in our heritage tours, and support Baltimore Heritage as members and sponsors. Our friends at the Greater Baltimore Urban League are opening up their historic Orchard Street Church for this free event that will include tours of the church (among the oldest structures built by a local Black congregation), food, drinks, and a chance for you to help us give away four preservation micro-grants.

This event is also our annual meeting where members elect new board members and officers. Please join us!

Also check out our jam-packed schedule of tours and talks over the next few weeks. On the afternoon of Sunday, September 23, local historian Jack Burkert will kick off our history lecture series at the Garrett Jacobs Mansion with a talk entitled: The Port of Baltimore: Shaping the City Over the Ages. On Wednesday, September 26, we are touring the Sheppard Pratt Hospital complex. And on the morning of Tuesday, October 2, we are repeating our tour of Fashions Unlimited garment factory.

Thank you again to everybody who volunteers with us and supports our work as members and contributors. Without you, we could not do what we do. I hope you can join us on October 2 and on some of our upcoming events.

Update –January 6, 2015: We just confirmed with Ashland Auction that 404 George Street is now under contract and the auction is cancelled. We plan to share additional information about the new owner and their plans for the building when we learn more. Thank you to everyone who helped spread the word!

Tucked away on a narrow street, 404 George Street has had our attention since concerned neighbors first contacted us in 2012 about this three-story rowhouse in Seton Hill. Next Thursday, January 7, the building is up for auction—offering a unique opportunity to buy a historic house just steps away from the famed Mother Seton House.

In July 2012, local residents pushed Baltimore Housing to file a receivership case against the owner who held the building since 1986. Receivership is a process where a municipality or a qualified non-profit applies for a court to appoint them as the receiver of the property and move to restore the property to use.

Unfortunately, years of neglect took a toll on the structure. At the first auction in October 2014, the 404 George Street received no bids from interested buyers. Thankfully, Baltimore Housing quickly responded and stabilized the building to make the property more attractive to prospective developers. Stabilizing distressed vacant houses is a key strategy for encouraging private reinvestment and is often more cost-effective than demolition.

On Thursday, January 7 at 1:00 pm, 404 George Street is up for auction again. If you are a local builder, developer or an enthusiastic home rehabber, we invite you to come out next Thursday and invest in this beautiful community. If you are a neighbor, we need you to help spread the word!

Built in the 19th century, 404 George Street is less than a block away from the Mother Seton House and St. Mary’s Seminary Chapel—an 1808 landmark designed by architect Maximilian Godefroy. St. Mary’s Park boasts a recently restored fountain and won recognition from Baltimore City Paper as the city’s best park in 2014. The 2012 master plan for Seton Hill has much more information on the neighborhood. Of course, the property is eligible for city and state historic tax credits—review our historic tax credit guide for more details.

Please help make 2016 the year that the vacant house at 404 George Street turns back into a home.

We’ve been busy this fall getting ready for Bmore Historic – our third annual “unconference” for historic preservation, public history and cultural heritage. If you work at a local archive, volunteer regularly for a historic site or house museum, or work in historic preservation, Bmore Historic is always a great opportunity to network with colleagues from all over the Baltimore region – and we still have a few spots left! Whether you’re coming to Bmore Historic or not, you are all welcome to join us this Friday evening at the St. Mary’s Historic Site for a tour and happy hour following the unconference.

Special thanks to Fr. John C. Kemper, S.S. and Heidi Glatfelter for hosting the Bmore Historic Happy Hour. Fr. Kemper will also be leading tours of the St. Mary’s Seminary Chapel: a Seton Hill landmark built from 1806 through 1808 by French architect Maximilian Godefroy for the French Sulpician priests of St. Mary’s Seminary. St. Mary’s Seminary Chapel won a 2013 Preservation Award from Baltimore Heritage this summer for a tremendous restoration by the Associated Sulpicians of the United States, together with Kann Partners, Lewis Contractors, Thomas Moore Studios, and Giorgini Construction. Their nine-month, $1 million project restored to Chapel to its centennial year appearance and surely guarantees its preservation for decades to come. 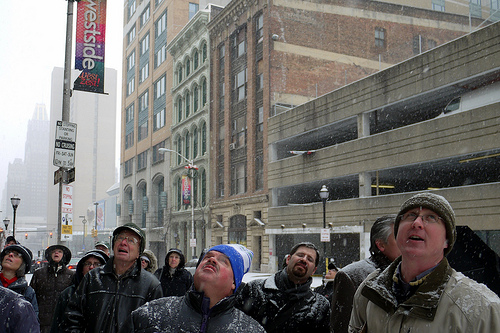 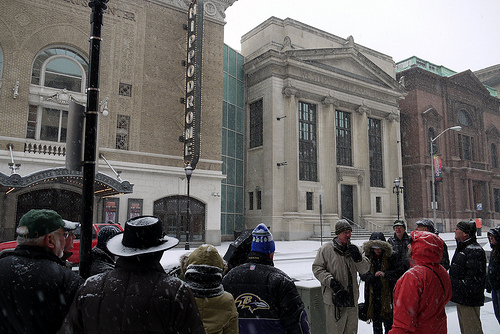 The Baltimore Building of the Week is St. Mary’s Seminary Chapel at 600 North Paca Street in Seton Hill– the first seminary established in the United States. Over two dozen photos of this important building were taken by the Historic American Building Survey in 1936 and tours of both the St. Mary’s Seminary Chapel and the Mother Seton House are offered every day of the week.

At a time when neoclassical architecture was in style, this gothic chapel, built in 1808, was an anomaly. Indeed, it is probably the first Gothic Revival building in the United States. It ushered in an era of eclecticism, in which architects worked different styles at the same time. The architect here was Maximilian Godefroy, recruited as a faculty member at St. Mary’s Seminary, founded in 1781 as Baltimore’s first institution of higher education. Godefroy was clearly happier in the neoclassical style (at the Battle Monument and the First Unitarian Church). The chapel is stiff and symmetrical, with “flying buttresses” facing the wrong way, but it pleased his patrons – Sulpician fathers homesick for the gothic monuments of their native France. The Seminary moved to Roland Park in 1927, but the Sulpicians should be congratulated for continuing to maintain this important building.