Come out for a free screening fro MARMIA’s compilation of the “Entertainment Page” section from WJZ-TV’s “City Line”, a segment on the Baltimore African American public affairs show. These clips date to approximately 1983-1984 and feature a variety of talent, mostly music videos.

Check out this sneak peak!

Join MARMIA on Saturday, December 29, 2018 at 6:30 p.m. to see the full video at the vegan burger joint Bmore Righteous.

Fall is just around the corner, and we’re looking forward to walking tour weather! We hope you can join us on Saturday, September 8 with a tour by our own Eli Pousson sharing stories of slavery and emancipation in Mount Vernon together with a guided tour of the recently updated Civil War exhibit at the Maryland Historical Society.

The following weekend on Saturday, September 15, historian and radio personality Lisa Simeone will walk us around Charles Village showing off the neighborhood’s fascinating history and eclectic architecture. And, on Wednesday, September 26, our hosts at Sheppard Pratt are leading a tour of their historic campus that has been the home of pioneering health care for over a century.

Next month, we are kicking off our Baltimore history lecture series in partnership with the Garrett Jacobs Mansion Endowment Fund. On Sunday, September 23, local historian Jack Burkert is delivering an afternoon talk entitled: The Port of Baltimore: Shaping the City Over the Ages. Monthly through the fall and winter, we’ll offer talks by Wayne Schaumburg, Ric Cottam, and Antero Pietila. Find the full list of upcoming talks on our calendar.

Enjoy the start of fall as you learn a little more about Baltimore on a tour or talk next month!

One hundred years ago, newly-wed couple Louis and Esther Rheb started making fudge and taffy out of their house on Wilkens Avenue. Join us on an August 8 tour to discover the story of Rheb’s candies and tour the family house and garage where a fourth generation still carries on this legacy business and long-time Baltimore favorite sweet spot.

Mark your calendar for a tour on Saturday, September 8 where we will visit the Maryland Historical Society’s newly updated exhibit “Divided Voices: Maryland in the Civil War,” then walk around Mount Vernon Place with our own Eli Pousson, and hear the neighborhood’s stories of slavery and emancipation. The following weekend, on Saturday, September 15, radio host, architectural historian, and Charles Village resident Lisa Simeone will lead a walking tour covering the colorful history of this rowhouse neighborhood.

We’re also pleased to announce a new lecture series in partnership with the Garrett-Jacobs Mansion. About once a month from September until March 2019, we’ll feature a different speaker on Baltimore history. The first speaker is historian Jack Burkert talking about the Port of Baltimore on Sunday, September 23. Other speakers include Wayne Schaumburg, Antero Pietilla, and Ric Cottom. Come to one or come to all!

We hope you are staying cool this summer and can stay tuned as we line up our fall tours, talks, and events. 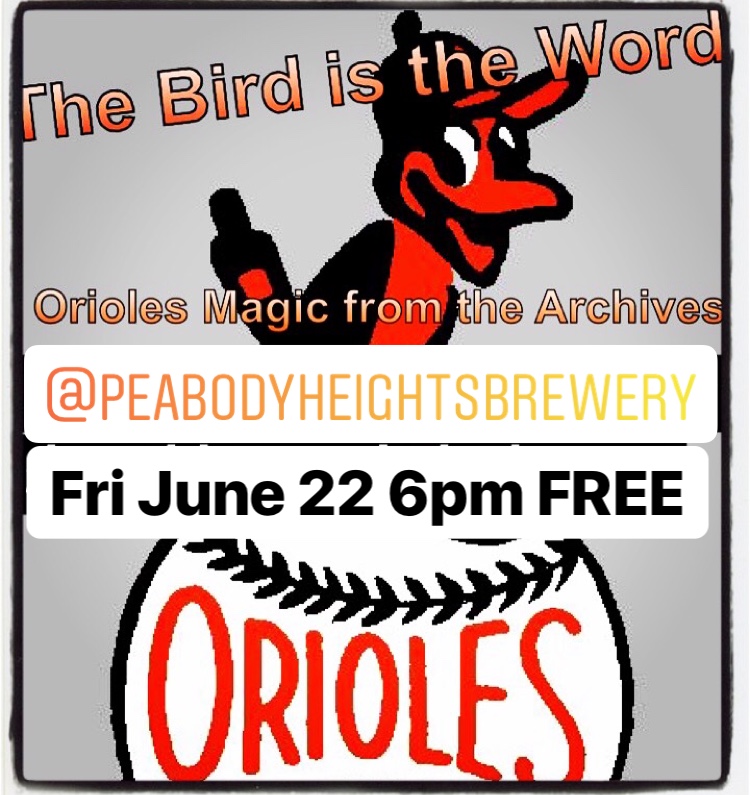 Celebrate the official beginning of summer by enjoying a beer with some rare archival baseball footage from the WJZ-TV Collection of MARMIA, the Mid-Atlantic Regional Moving Image Archive.

This free screening will feature highlights from the history of the Baltimore Orioles baseball team, with footage from the 1960s through until the construction of Camden Yards in the 1990s, including some of the greats: Brooks Robinson, Frank Robinson, Jim Palmer, Eddie Murray, Cal Ripken Jr, and more!

We are also starting the show with a short segment on the Baltimore Elite Giants who used to play at Old Oriole Park, the site of the venue Peabody Heights Brewery. Other highlights include titles like: “O’s in their Undies”, “Oriole Bird Tryouts”, and interview footage of Babe Ruth’s sister!

Although Charles Village is better known for its colorful “painted ladies,” the neighborhood was home to many of the activists and institutions at the heart of the city’s LGBT community in the 1970s and 1980s. Whether you lived this history or are learning it for the first time, this tour is a unique opportunity to explore the places that shaped the growth of Baltimore’s LGBT community and civil rights movement.

END_OF_DOCUMENT_TOKEN_TO_BE_REPLACED

“Life Goes On:” The Legacy of Henrietta Lacks and Turner Station