Skip to content
Today the nearly 20-year-old effort to recognize the important history and heritage in the Poppleton neighborhood took a big step forward. The Land Use Committee of Baltimore’s City Council endorsed a bill to designate Sarah Ann Street and parts of adjoining North Carrollton Street as a local historic district. The bill still has a few steps to go within City Council, and the mayor must sign off on it as well, but the recent actions are a clear victory for the residents and friends who have worked so long for this designation.
Back in 2004, Baltimore Heritage got involved in the work to prevent the Poppleton houses from being demolished. Our board member, Tom Ward, got Baltimore Heritage connected with neighbors, including activist Sonia Eaddy, who were fighting a proposed demolition project backed by the City and a developer based in New York. There have been a number of historic houses demolished over the last 18 years, including the home of one-time West Baltimore political kingmaker Boss Kelly. The recent action by the City Council will protect a critical core block of alley houses on Sarah Ann Street that have been owned by Black Baltimore families since they were built in the 1870s. Baltimore Heritage stays committed to helping the Poppleton community and will periodically share significant developments.

Recently the Greek Orthodox Cathedral of the Annunciation announced that it is seeking to demolish five adjacent rowhouses on Preston Street in the Mount Vernon neighborhood across the street from the church. Below is a little information about why these rowhouses (number 35-43 West Preston Street) are quite special architecturally and historically, and why Baltimore Heritage has joined the neighborhood association and people across the city in calling on the church to be a good neighbor and work to find a solution that preserves the buildings.

We encourage you to add your voice by sending an email to the director of the Baltimore Commission for Historical and Architectural Preservation, Eric Holcomb (eric.holcomb@baltimorecity.gov), and copying the neighborhood’s city council member, Eric Costello (eric.costello@baltimorecity.gov). Click here to see an example letter.

The city’s preservation commission is scheduled to hold a hearing on this issue on Tuesday, December 13, 2022.

Although the houses are rowhouses like thousands of others in Baltimore, they are one of only two rows like them anywhere in the city. They were constructed between 1891 and 1893 in a row that contains ten houses total and, along with the 1000 block of North Calvert Street, are a signature step in Baltimore’s movement from Victorian style houses towards Colonial Revival. They were designed by noted Baltimore architect John Appleton Wilson, who not coincidentally also designed the houses on Calvert Street.

If you look closely at them, you’ll notice a few unusual and wonderful things. First, they are not the classic Baltimore red brick that so many other rowhouses are made from. They are tan color that likely was intended to make these houses stand out from their older red brick neighbors. They are also grouped in pairs, with the front doors next to each other by twos. These give the houses a more classically symmetrical feel and also make them appear wider than they in fact are. And finally, if you look at the doorways, on each side is a classical Ionic column formed from rounded brick, a feature that architectural historian Fred Shoken says may be unique to this row.

In addition to these unusual architectural features, the buildings are part of an unusual history around early women doctors at Johns Hopkins. Dr. Elizabeth Hurdon, a gynecologist, was the first woman hired by Hopkins in 1897. She lived at 31 W. Preston (not proposed for demolition) with Dr. Florence Sabin, who was the first woman hired faculty at Hopkins Medicine and the first woman elected to the National Academy of Sciences. From 1927 to her death in 1956, Dr. Esther Richards lived a few doors down at 41 W. Preston (which is slated for demolition). Dr. Richards was a Hopkins trained psychiatrist and professor.

Current Status and Next Steps

Since the mid-1990s, the Greek Church has owned the five buildings they are now proposing to demolish. They have been vacant for many years, but the front facades remain in remarkably good condition. The back portions of the houses, however, are in serious disrepair, including a mature sumac tree that is growing through the back portion of one of them. We are working with the Church to get a look inside, and will go in with the knowledge that there have been many, many rowhouses in the city that were in as bad a shape or worse and were successfully rehabbed and put back into productive use. One thing we are blessed with in Baltimore is a deep bench of architects and contractors who have loads of experience with buildings just like these.

The city’s Commission for Historical and Architectural Preservation (CHAP) is scheduled to hear this issue on Tuesday, December 13, 2022. This is called a “Part 1 Hearing,” and in it CHAP will determine whether the houses continue to contribute to the Mt. Vernon Historic District. In other words, they will decide whether they are in good enough condition to still be deemed “historic.” If the CHAP commission does in fact deem them “historic,” which we highly anticipate they will, and if the Church continues to seek only a demolition solution, there will be a second “Part 2 Hearing” in the future where the CHAP commission will decide whether to grant approval to the demolition proposal.

Add your voice! Click here to see an example letter.

We will keep updating this blog post and the situation develops.

This afternoon the city’s historic preservation commission (CHAP) advanced the nomination for Sarah Ann Street in the Poppleton neighborhood of West Baltimore to become a local historic district. The district would include the alley houses in the 1100 block of Sarah Ann Street that have been owned by Black Baltimore families since they were built in the 1870s, as well as two houses on North Carrollton Street that also have rich histories. The next step for the nomination is for the preservation commission to conduct further research and solicit additional input from the public before holding a second and final hearing this fall.

We at Baltimore Heritage first got involved in the effort to save these historic houses from being demolished back in 2004. We joined neighborhood residents, including homeowner Sonia Eaddy and her family who still live there and are still active advocating for their homes, along with retired judge Tom Ward who worked for decades preserving historic places in West Baltimore. The city’s recent willingness to create a new historic district and preserve the houses comes after years of uncertainty. It also comes after new allies joined the fight, including Dr. Nicole King and her students from the University of Maryland Baltimore County.

If you would like to have your voice heard on this issue, you can email comments to the preservation commission’s executive director, Eric Holcomb: eric.holcomb@baltimorecity.gov. And check back here for additional information as the Sarah Ann Street historic district proposal advances.

Yesterday the Sellers Mansion in Lafayette Square had a fire inside. Built in 1868 just after Lafayette Square turned from a Civil War Union Army hospital base into a residential community, the mansion is listed as a Baltimore City historic landmark. It has anchored the Lafayette Square neighborhood for nearly 150 years as a private residence and as offices for community nonprofit organizations. And it has been vacant for over 20 years. See our Five Minute Histories video on the Sellers Mansion for more of its history!
We checked things out at the mansion this morning, and it appears the damage was contained to the interior and the roof. That’s the good news. The challenge is that the building is in severely poor shape and needed attention before the fire, and even more so now. As the Baltimore Sun reported this morning, it is owned by developer Ernst Valery and although the city approved redevelopment plans about two years ago, work has yet to begin.
We at Baltimore Heritage have been working to try to save the Sellers Mansion for nearly 25 years and remain committed to do everything we can to see this grand Second Empire building return to being an asset for the Lafayette Square neighborhood in West Baltimore. Scroll down to see photos taken this morning by Baltimore Heritage’s Executive Director Johns Hopkins. 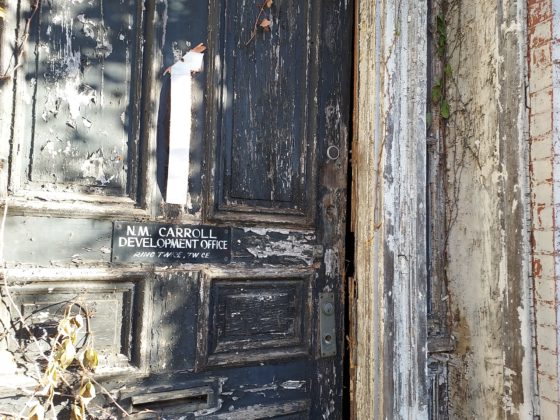 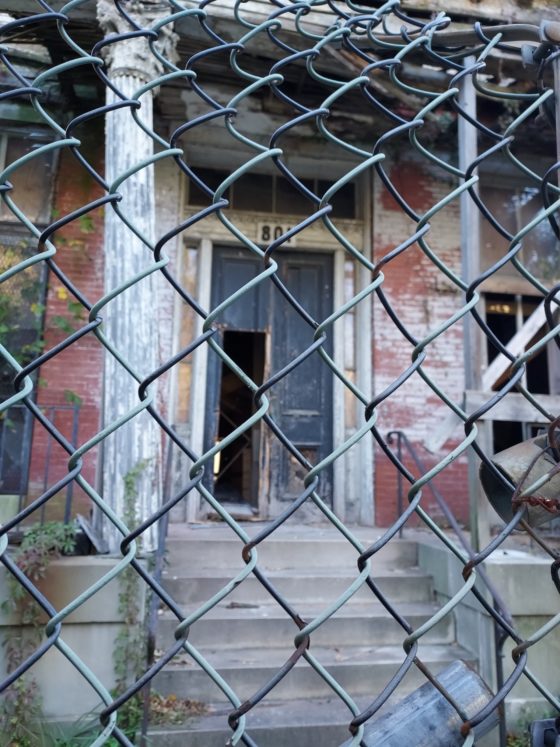 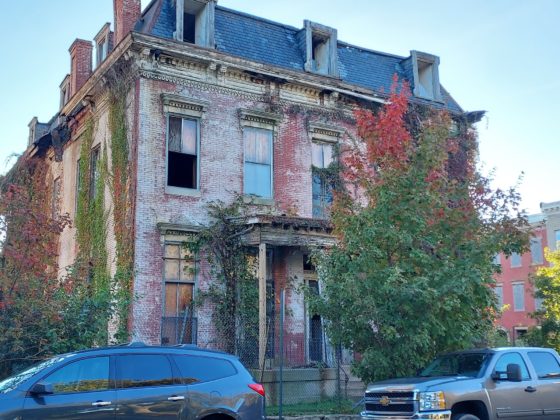 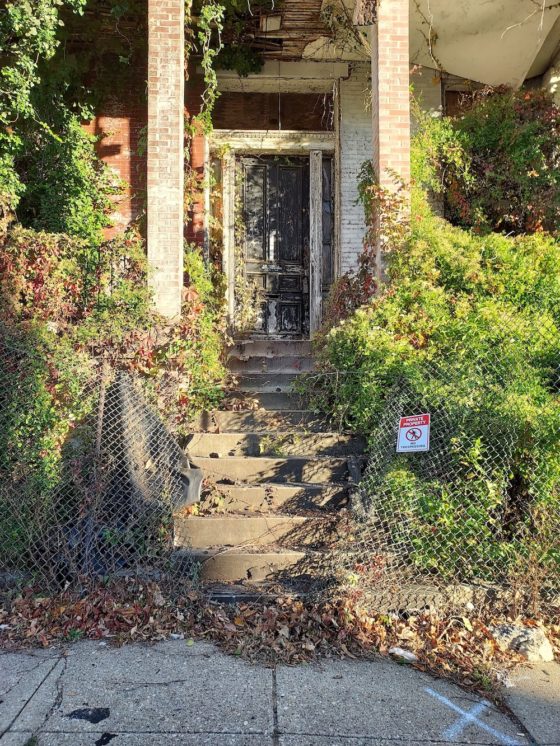 For the background of this story, please see our older Woodberry demolition post. Below, we hope you enjoy our guest blog post by the chair of one of Baltimore Heritage’s partner organizations, Greater Hampden Heritage Alliance, and member of the Woodberry Community Association, Nathan Dennies.

On December 10, I joined dozens of supporters at the second Commission for Historical and Architectural Preservation (CHAP) hearing for the Woodberry Local Historic District. The hearing was a crucial step toward making the local historic district a reality, a move that will provide stronger preservation oversight and give the community more say about its future. I was there as a Woodberry resident and representative of the Greater Hampden Heritage Alliance, the community’s historic preservation organization and a partner of Baltimore Heritage. Joining me were dedicated members of the Woodberry Community Association, and allies at Baltimore Heritage, Preservation Maryland, and the Friends of The Jones Falls.

Overwhelming support led CHAP commissioners to unanimously recommend the Woodberry Local Historic District be introduced as a bill to City Council. The victory was the result of months of community organizing. The hardest part is yet to come.

After the Woodberry Local Historic District is introduced to City Council, a third public hearing will be held by the Baltimore City Planning Commission. Our goal is that the local historic district move through with the recommendations CHAP unanimously approved at the December 10 hearing. These recommendations have the overwhelming support of the Woodberry community. They speak to the national historic significance of Woodberry and a future that respects its historic fabric, providing oversight for its factories and the historic homes of its workers.

Thank you to everyone who has shown support by writing letters, sharing with friends and neighbors, and taking the time to attend hearings. We’ll need your support again soon. After the next hearing, we’ll be close to the finish line. Woodberry is to Maryland what Lowell is to Massachusetts. Your support will help to protect this treasure and encourage future development that is mindful of the Woodberry’s meaningful past.