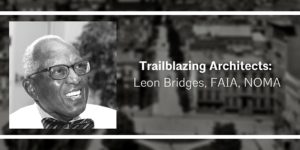 Join us for a conversation with trailblazing architect Leon Bridges, FAIA. As part of the celebration of AIA Baltimore’s 150th anniversary, we are hosting conversations with trailblazing architects in Baltimore, discussing their impact on the profession and our communities. Leon Bridges, FAIA, NOMA, is a Fellow of the American Institute of Architects, and a Past Vice President of the organization. Since entering the architecture profession as a draftsman in 1956, Bridges has won 20 national, regional and local awards for design excellence including the restoration of Baltimore’s Penn Station and Baltimore City College. Bridges is also a Past President of the National Organization of Minority Architects (NOMA). Bridges semi-retired from active practice in 2005 to become an Assistant Professor in the Morgan State University School of Architecture and Planning. His major interest is in preparing African American students for the practice of architecture. 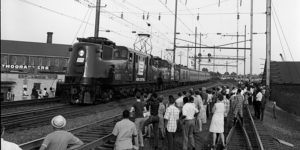 On June 8 1968, the Robert F Kennedy Funeral Train rode through Baltimore, on its way to Washington D.C., carrying the body of Senator Robert F Kennedy. On board the train was photographer Paul Fusco, who during the journey photographed the many bewildered mourners paying their final respects. A cross-section of American society—Black and White, city-dwellers and country folk—all stared at the slowly passing train.

We hope you'll join us to hear photographer Rein Jelle Terpstra talk about his project to search for the reverse photographic perspective: pictures and films made by the bystanders that stood along the railroad that day. Here, the mourners do not merely play a role in someone else’s pictures, but are the photographers and filmmakers themselves. With their cameras, they gazed back at the train and recorded it in their own fashion. On his research trips, Terpstra visited almost all of the places that the funeral train passed through in an effort to track down people who took photographs of the train passing. This project is entirely based on memories, snapshots, home movies, and sound, recorded by bystanders standing along the tracks that day.