Baltimore’s history is more than bricks and mortar…it’s mostly about people! Just as much as our harbor and our great neighborhoods, Baltimore’s longstanding businesses are a central part of what makes our city unique. Baltimore Heritage’s Legacy Business Program highlights the city’s businesses that have survived for over 100 years and are still going today. Thank you to our volunteer, Richard Messick, for his research and writing about Baltimore’s historic businesses.

When John H. Murphy, Sr. purchased the Afro-American Newspaper in 1897, the idea of sending a poet to cover a civil war in Spain was probably far from his mind, especially a poet as distinguished as Langston Hughes. His paper, after all, had a humble beginning. The Afro, which recently celebrated its 130th anniversary, was founded in 1892 as a church newsletter. It changed hands a few times before being purchased by Mr. Murphy in 1897. He then took this small church paper and expanded the operation to over 100 employees before his death in 1922. His son, Carl Murphy, followed his father as chairman and expanded the operation even further, increasing the circulation to 235,000 by 1945.

It was Carl Murphy who made the decision to hire Hughes to cover the Spanish Civil War in 1937. Though an unusual choice, it was not a singular one. Mr. Hughes joined a rarified group of literary writers who reported on various conflicts, Stephen Crane and Ernest Hemingway among them. The editor-publisher, Carl Murphy, had commissioned Hughes to report on the experience of “colored sympathizers from many lands” who fought on both sides of Spain’s Civil War. He wrote about people who wanted to fight for democracy against fascism. He also wrote about the “Moors” (Muslims from North Africa and Spain) who were used “as canon fodder for Franco.” This was one of the missions of the newspaper after all–to report on the lives of the ordinary “colored” person. 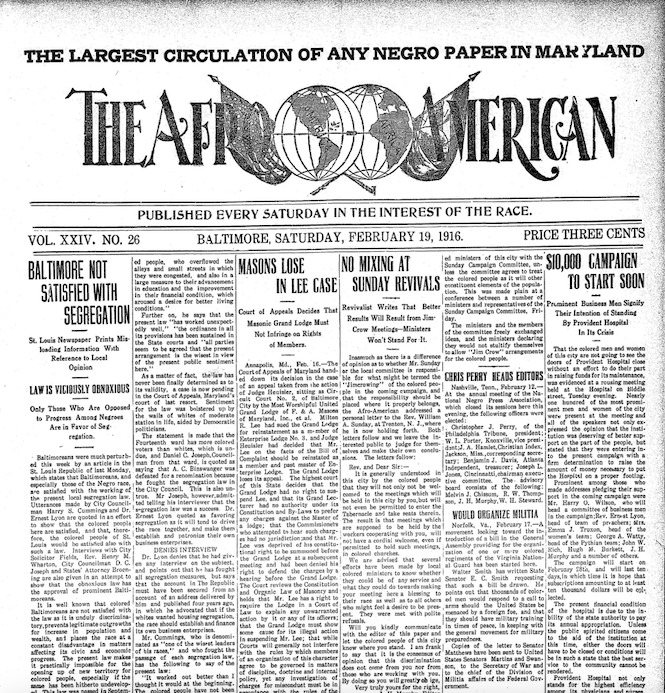 Another aspect of the paper’s mission has been to give fuller accounts of stories that historically the mainstream press has missed. The Afro was one of innumerable newspapers that covered two lynchings on the Eastern Shore of Maryland–Matthew Williams in 1931 and George Armwood in 1933. Their account of the treatment of Williams, for instance, was taken from a light-skinned, African-American who was able to blend into the white crowd and witness the events. This witness reported that Williams was thrown out of the window of a hospital where he was being treated and dragged to the courthouse where he was lynched. Whereas the Baltimore Sun’s account stated that Williams was “taken quietly” from the hospital and “escorted” to the courthouse square. The Sun published an editorial in 2018 apologizing for its woeful shortcomings in the reporting of these two lynchings in Maryland.

Innovative reporting and filling in the details of the lives of their readers are only two of the legacies of The AFRO. Today the 4th and 5th generations of the founder’s family continue to run an operation with offices in Baltimore and Washington, DC.

Before we turn all of our attention to holiday planning, check out our upcoming heritage talks and tours to get to know even more about Baltimore’s history this winter season.

On December 15, join author Elaine Weiss for a lecture on her book, The Woman’s Hour: The Great Fight to Win the Vote, which chronicles the struggle for American female suffrage. Ms. Weiss’s book is so compelling that Steven Spielberg and Hillary Clinton are teaming up to turn it into a movie! This Thanksgiving, we are especially grateful for the women and men who fought for voting rights over a century ago.

On December 14, catch our last Lexington Market tour of the year. See behind-the-scenes at what Ralph Waldo Emerson dubbed “the gastronomic capital of the world” and the catacombs under the marketplace. Be sure to stock up on the candies and baked goods at the market for your holiday sweet tooth!

Finally, with Thanksgiving around the corner, we at Baltimore Heritage have a lot to be thankful for, starting with the kind volunteers who lead our tours, research and write about historic places for Explore Baltimore Heritage, join us in fighting for threatened historic landmarks, and so much more. You make our work possible. Thank you all!

Eli Pousson, Director of Preservation and Outreach at Baltimore Heritage shares his perspective on heritage and preservation and tells us how digital platforms have expanded the number of stories they can tell about Charm City.

Happy Valentine’s Day! Thanks to everyone who showed up for the Mount Vernon Valentine’s Tour this past Sunday. One of our favorite stories from the tour was the story of Baltimore’s Wallis Simpson and her marriage to Edward VIII: a man who gave up the throne of England to be with the woman he loved. Nathan Dennies, one of our volunteer writers and a student at the University of Baltimore, has finished writing a great story on Wallis’ time living with her mother and stepfather at 212 East Biddle Street:

The house on 212 East Biddle Street had three bedrooms: one for Wallis, one for her mother,and another that Wallis assumed was a guest bedroom. Little did she know that her mother was planning on remarrying and the extra bedroom would soon become the room of her new stepfather, John Freeman Rasin, son of the head of the Baltimore Democratic Party, Carroll Rasin. Wallis was crushed. She had envisioned a life of independence with her mother, free from relying on the financial help of others. Wallis threatened to run away, but reluctantly came to terms with her mother’s decision.

The marriage was held in the parlor of their home on June 20, 1908. The climax of the wedding came when Wallis, perhaps out of spite, snuck off to the kitchen and dug her hands into the cake in search of the good-luck tokens hidden inside. When her mother and stepfather came into the kitchen and saw the ruined cake, they stood speechless. Suddenly, Mr. Rasin laughed, picked Wallis up, and twirled her in the air. This act of forgiveness touched the young Wallis, and she never gave her stepfather any more trouble.

Here is an exciting opportunity for anyone who loves Baltimore’s literary history: F. Scott Fitzgerald’s Bolton Hill rowhouse is now for sale! F. Scott and Zelda Fitzgerald lived in the home in the 1930s through several tumultuous years. The four bedroom, four bath house is going for $450,000. Take a look at the listing or stop by the open house before the Ravens take on the 49ers this Sunday, February 3 from 12:00pm to 2:00pm.

In August 1933, F. Scott Fitzgerald moved with his family to 1307 Park Avenue. Fitzgerald had been forced out of his previous home in Towson due to a house fire attributed to his mentally ill wife, Zelda. Their rowhouse, a ten minute walk from the monument of Fitzgerald’s famous ancestor, Francis Scott Key, quickly became a place of turmoil, and was the last place where he and Zelda lived together.

Fitzgerald couldn’t get back on his feet at his new home. His first published novel in ten years, “Tender is The Night,” tanked after its April 1934 release, selling only 13,000 copies to mixed reviews, and left Fitzgerald under immense financial strain. Everyone in the house was affected. Zelda and Fitzgerald’s daughter, Francis Scott “Scottie” Fitzgerald, acted as a go-between for their landlord, forced to constantly ask her father for rent money.

Zelda, who spent her weekdays hospitalized at Sheppard Pratt in Towson, had a brief period of wellness during the first few months at 1307 Park Avenue and was allowed to go home and take painting classes at the Maryland Institute College of Art. However, her mental illness soon worsened and she was moved to the expensive Craig House sanitarium in New York, only to return to Sheppard Pratt in May 1934 in worse shape than ever.

While Zelda was in the hospital, Fitzgerald’s dependency on alcohol grew, and she even faced some hard times at the hospital. Writer H.L. Mencken, a friend of Fitzgerald who lived nearby in Mt. Vernon at the time, wrote in his journal in 1934, “The case of F. Scott Fitzgerald has become distressing. He is a boozing in a wild manner and has become a nuisance.”