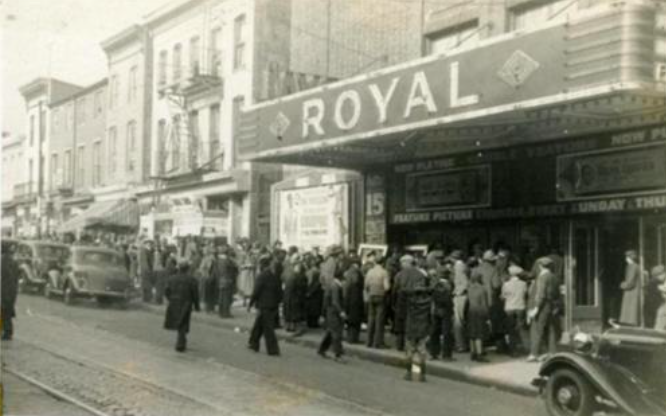 In honor of the 100th anniversary of the Royal Theater, we arev hosting a talk on the theater and the work being done to revive this historic community through the insights of three guest speakers.

Amy Davis will present vintage images of the Royal Theater and few of the other opulent movie palaces in its day looking through a social, cultural and architectural prism to understand Baltimore’s history. The Royal Theater, located at 1329 Pennsylvania Avenue in Baltimore, first opened in February 1922 as the black-owned Douglass Theatre before changing its name in 1925 to The Royal. It became the most famous theater along West Baltimore City’s Pennsylvania Avenue, one of a circuit of five such theaters for black entertainment in big cities, which hosted some of the world’s greatest musical acts and entertainers, before it was demolished in 1971.

James Hamlin, president and founder of The Royal Theater & Community Heritage Corporation, will share some of what is being done to preserve, promote, and recreate the greatness of the African American Historic West Baltimore Community and Historic Pennsylvania Avenue. In his words: “2-1-2-1-7 on Pennsylvania Avenue and the surrounding community were the epicenters of the African-American [life] in Baltimore. This is a community where Cab Calloway walked. This is where Billie Holiday landed. This is where Thurgood Marshall grew up. This is where every entertainer that you can think of has walked up and down The Avenue and entertained at The Royal Theatre.”

Kathleen Sherrill, AIA will highlight her work along the Pennsylvania Avenue corridor, Maryland’s only designated Black Arts and Entertainment District. She firmly believes that architects should challenge themselves to play a key role in improving and supporting Baltimore’s underserved neighborhoods, guiding communities to invest in themselves and the next generation through ownership.

Amy Davis, an award-winning photojournalist for the Baltimore Sun, spent nine years researching and photographing Baltimore’s movie theaters for her book Flickering Treasures: Rediscovering Baltimore’s Forgotten Movie Theaters. Her fine art training from The Cooper Union informs her documentary approach. The book includes rare photos, combined with Davis’s evocative color photography and poignant reminiscences, bring a century of movie-going to life. Her photographic work is in the collection of the Hudson River Museum (Yonkers, NY), and has been exhibited at The Brooklyn Museum, The Jewish Museum of Maryland, and at Baltimore area galleries. Amy lives in Baltimore near the 1939 Senator Theater, which helped inspire her book.

James W. Hamlin is the Owner and Operator of “The Avenue Bakery” on Pennsylvania Avenue, celebrating its10th anniversary this past August in offering distinctive homemade rolls, pastries and beverages promoting and advocating for other black owned businesses to come back to our historic community to make it once again an economic center of our community. He is president and founder of The Royal Theater & Community Heritage Corporation, a 501©3 non-profit that focuses on this Historic West Baltimore African American Community and the creation of economic development to provide jobs for its youth.

Kathleen Sherrill, AIA, NOMA, NCARB, LEED AP, founded her firm of SP Arch Inc. in 2005 with former partner Mahendra Parekh (who retired in 2008), and offers a broad array of planning, architectural design, and landscape architecture services. In 2011, Kathleen was awarded both Top 100 Minority Business Enterprises in the Mid-Atlantic Region and outstanding alumni by the School of Architecture and Planning at Morgan State University (MSU). The first (and only) African American to serve as president of AIA Baltimore and of AIA Maryland, she helped establish the local chapter of the National Organization of Minority Architects (NOMA) in 2017 and served as its first president. www.spa-corp.com

This program is hosted on Zoom. Upon registering you will receive an email confirmation and a Zoom link. If you do not receive a link, please contact Molly Ricks (ricks@baltimoreheritage.org). If you do not contact us at least 1 hour prior to the start of the program, we cannot guarantee admittance.

Tickets are donation based. We encourage you to give what you can to support BAF and Baltimore Heritage. Your support helps us make up for lost tour and program revenue from COVID-19 and create more virtual programs like this. This special program is hosted in partnership with the Maryland Center for History and Culture, who are currently hosting the exhibit “Flickering Treasures” through September 2023.