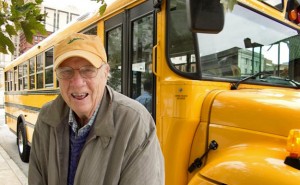 Our private group tours are a perfect way to explore Baltimore, discover hidden landmarks and enjoy unique stories from over 200 years of local history.

Let us know if we can host a tour for your professional meeting, academic conference, family reunion, or any other occasion. And don’t forget – visitors are always welcome on any of our events, check out our calendar here.

Central Baltimore By Bus: Explore the highlights of what makes Baltimore “Baltimore” with this two hour bus tour through downtown Baltimore and central historic neighborhoods.  Includes a stop to stretch legs at Historic Union Square.

Full Day Baltimore By Bus: If you’re visiting Baltimore for the first or thirty-first time, this tour is a great way to get to know Baltimore (maybe better than most Baltimoreans).  It includes learning about rowhouses, alley houses, formstone, grand mansions, blue crabs, the War of 1812 and much more. We can tailor the trip to suit your timing needs. 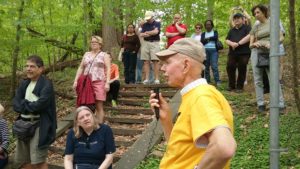 Bring your school group, book club, or office on a private tour with us! We can tailor any tour from 1-2 hours in length. Many offerings can be adapted for 45-min office lunch or happy hour tours. One-hour tours are $125 and two-hour tours are $200.

Please contact Molly Ricks at ricks@baltimoreheritage.org or 240-305-3984 for more information about scheduling a walking tour for your private group.

Baltimore’s Little Italy: Join us on a trip through Little Italy! We’ll learn a little more about the neighborhood’s standouts like bocce ball, St. Leo’s Church, and the power-house residence of Tommy D’Alesandro and his daughter Nancy Pelosi. We’ll also hear some of the colorful stories that make the neighborhood’s Italian history so rich, including about gangster Al Capone’s four month stint in Charm City and our hometown hero Spiro Agnew’s fall from grace.

Camden Station and the B&O Warehouse: Camden Station is more than an old train station. The building played a central role in the first bloodshed of the Civil War. The brick warehouse next to the station also can claim its place in history as part of the B&O Railroad, which pioneered railroading in America from its home base in Baltimore. Join us to learn about these important pieces of American history next door and more!

Charles Center and the Historic West Side of Downtown: Historic downtown along Howard, Eutaw and Baltimore Streets has some of the finest cast iron buildings in the country. It also has the bar that Babe Ruth’s father owned and where the young Babe spent a little more time growing up than maybe was good for him. From straw hats to harlequins, from hops to harpsichords, the West Side is teaming with history.

Civil Rights: Foundations of the Movement on Lexington Street: In the 1940s, picketers protested the racist policies of department stores that barred African Americans shoppers.. In the 1950s, students organized one of the first lunch counter sit-ins at Reads Drug Store. And in the 1960s, Lexington Street was the focus of a campaign by the Afro-American newspaper called “Orchids and Onions,” which shamed stores that had yet to desegregate. Join Baltimore Heritage to learn about the nationally-important role that Lexington Street has played in shaping the modern Civil Rights movement.

Edgar Allan Poe’s Gravesite: Still Spooky After All These Years: “And so being young and dipped in folly, I fell in love with melancholy.” So wrote the ever-dark Edgar Allan Poe in 1829 in his poem Romance. Rather than heed his macabre words, join us for a walk to Poe’s gravesite at Westminster Hall Burying Ground to learn a little about Poe and the Baltimore of his day.

Federal Hill: Join us on a tour of Federal Hill and the surrounding neighborhood to learn about this waterfront community’s rich history, including stops at one of the last wooden houses in the city, the oldest house in Federal Hill, and of course, the hill we fortified to defend the city from the British in the War of 1812.

Gargoyles Galore: Looking Up Downtown: Where can you find a piece of the Berlin Wall, a cannon ball mounted on a Conestoga wagon hitch, and over a hundred lions looking down at you from the tops of Baltimore’s buildings? On our Downtown Landmarks and Lions tour, of course! In this leisurely stroll, you’ll see and hear the highlights of downtown Baltimore’s history and architecture.

Green Mount Cemetery: Opened in 1839, Green Mount is an early example of an urban-rural cemetery, that is, a cemetery with a park-like setting located close to the countryside. Green Mount is the final resting place of some of Maryland’s most famous, and infamous, figures including Johns Hopkins, Enoch Pratt, William and Henry Walters, Mary Elizabeth Garrett, Betsy Patterson, A.S. Abell, John H. B. Latrobe, A. Aubrey Bodine, John Wilkes Booth, and Elijah Bond, who patented the Ouija Board!

Historic Jonestown and the Shot Tower: Anchored by the Phoenix Shot Tower, Historic Jonestown is one of the oldest neighborhoods in the city and includes often overlooked landmarks. In addition to going inside the Shot Tower, on this tour you’ll learn about the city’s oldest religious building (Friends Meeting House) and the third oldest synagogue in the country (Lloyd Street Synagogue), and the longest-lived signer of the Declaration of Independence, Charles Carroll.

Landmarks on the Inner Harbor: Did you know that the Maryland Science Center has roots that go back to 1826? Or that at one time, Six Flags operated an amusement park out of the Power Plant? Or that Domino Sugars processes 6.5 million pounds of raw sugar on any given day? Join Baltimore Heritage to learn some of the back stories to the wonderful places that dot our Inner Harbor.

Modern Architecture Downtown: Baltimore’s downtown is awash with great Modern architecture. We’ll talk a little about clean lines, the absence of ornament and things that make up Modernism. And we’ll talk a little about where John Lennon drank scotch and Coca Colas, why our convention center is structurally like the Brooklyn Bridge, and why we have the tallest five-sided building in the world.

Outdoor Sculpture: Art Hidden in Plain Site around the Convention Center:
Did you know that Baltimore’s arts community pitched a feverish battle against the city’s federal judges in the 1970s over a proposed new public sculpture at the federal courthouse? Or that the arts community won!? We walk past public artwork every day downtown. Join us to learn a little about it.

Outdoor Sculpture: Discovering Commerce Park: Near the Baltimore Harbor, there is a wonderful cluster of public art. We’ll ponder Mark di Suvero’s sculpture, Under Sky/One Family and then walk a few blocks away to stand at a set of sculptures crafted in 1976 by four artists who worked onsite for 10 hours a day for a week to create the pieces. And nearby is Baltimore’s Holocaust Memorial, including a poignant work commemorating the 50th anniversary of the Kristallnacht attack.

Otterbein and the Dollar House Program: Otterbein’s wonderfully rich history is in many ways a microcosm of Baltimore’s story as a whole. From its roots as an early waterfront community in the 1840s to its influx of European immigrants in the 20th century all the way to its center-stage role in Baltimore’s Dollar House Program in the 1970s, this neighborhood is brimming with stories to tell.

Out of the Ashes: Baltimore and the Great 1904 Fire: In 1904, a fire swept through downtown Baltimore destroying 1500 buildings, causing $150 million in damage, and leaving 35,000 people unemployed. Baltimore was determined to rebuild and this effort is at the heart of how downtown looks and functions today. Join us to learn about the fire and how it shaped the area around our office.

Ridgely’s Delight: George Washington Slept Here…Really!: For a diminutive neighborhood squeezed between the University of Maryland and Camden Yards, Ridgely’s Delight contains a supremely oversized history. Babe Ruth was born here, and George Washington slept here. Join us as we stroll through this charming community (one of the oldest neighborhoods in Baltimore!) and learn about some of its rich heritage.

LGBTQ History in Mt. Vernon: Mount Vernon, with its nineteenth century homes, many of the city’s cultural institutions, and its own literary history, has also long been regarded as Baltimore’s gayborhood. In our walk, we’ll learn about pioneering lesbian women who helped shape Baltimore’s educational institutions, medical professionals who were on the front lines of the AIDS epidemic, and residents who founded Baltimore’s first black LGBTQ church. Join us to see how Baltimore’s LGBTQ community has been an integral part of the neighborhood’s history.

Mt. Vernon: Cradle of American Philanthropy: From its country beginnings as Revolutionary War hero John Eager Howard’s estate, the Mount Vernon neighborhood grew up as the place to live for Baltimore’s rich and famous in the 19th century. The Garretts, owners of the B&O Railroad and the Walters, founder of the Walters Art Museum, are among the families that built handsome mansions near the Washington Monument. Join us on a stroll to learn about fascinating history and current revitalization happening in this grand historic district.

Industry and Artistry at Station North: Our tour will take in 100 years of industry and innovation: the historic theaters, schools, markets, and factories that make the Station North Arts and Entertainment District a current hot spot of arts and culture. In the first few decades of the 20th century, the inventor of the modern bottle cap built his factory on Guilford Avenue and entrepreneurs on Charles Street pushed the theater business in new directions.

LGBTQ Heritage in Charles Village: Although Charles Village is better known for its colorful “painted ladies,” the neighborhood was home to many activists and institutions at the heart of the city’s LGBT community in the 1970s and 1980s. We will walk past local landmarks including the original home of the Gay Community Center of Baltimore and the St. Paul Street church that supported the growth of the Metropolitan Community Church, Baltimore’s oldest LGBTQ religious organization.