Join us for another free introductory workshop with Retrofit Baltimore on combining weatherization and historic tax credits for your next home rehabilitation project.

Does your old house feel a bit too hot in the spring and summer? You may want to consider weatherizing your home to improve its comfort and efficiency while saving money with historic tax credits at the same time. Join Baltimore Heritage and Retrofit Baltimore for a free one-hour workshop where you will learn more retrofitting your historic home for energy efficiency.

We’ll also tell you how to use city and state historic tax credits for weatherization or other home rehabilitation projects. If you are a home-owner in Roland Park, Homeland, Ednor Gardens, Original Northwood, or another of the over 70 historic districts across the city, historic tax credits can help you with the cost of essential home maitenance and rehab projects from re-painting to re-pointing – even furnance replacement or roof repairs. Take a look at our resource page on historic tax credits for more background then register and come to our workshop on May 29, 6:30pm to 7:30pm. 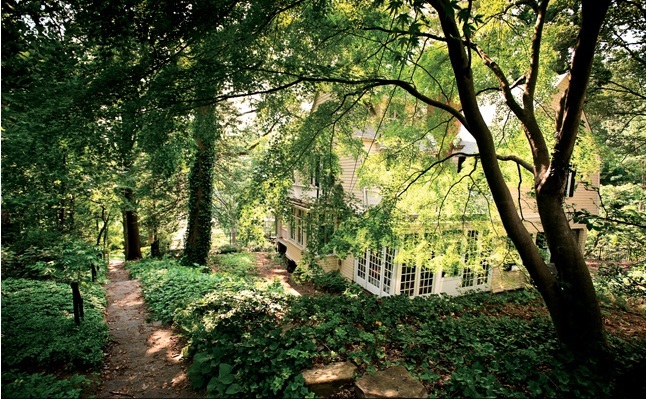 Okay, maybe the footways in Roland Park aren’t that much of a secret, but they are somewhat hidden and are an important part of the neighborhood’s Olmsted design. Please plan to join us for our next Behind the Scenes Tour on Saturday, November 5th at 2:00 p.m. We will start with a short walking tour led by Judy Dobbs of the Friends of Maryland’s Olmsted Parks & Landscapes, who will escort us along some of the Olmsted paths through Roland Park. We will end where we begin, at the house where the Odyssey and Baltimore Lab Schools got their start, 4906 Roland Avenue, for a tour by current owner Ms. Elissa Strati.

We will start and end the tour at 4906 Roland Avenue. Parking is available on the street. We will go rain or shine.

The Roland Park Company developed Roland Park in the late 1800s. Incorporated into its plans was a series of 18 footpaths, designed to expedite foot traffic between sections of the neighborhood, especially those where the terrain made it difficult to build roads. Designed by the firm of Frederick Law Olmsted, Jr., the paths were part of a hierarchical system of roads in front of houses, service lanes in the rear, and footpaths that provided convenient ways to cross through the neighborhood in a natural setting. Each path is named with a distinctly country ring: Squirrel, Hilltop, Laurel, Tulip. Others are decidedly British: Audley End, Tintern, St. Margaret’s, Litchfield. In 1991, the paths were refurbished and cedar posts installed with handmade white oak replicas of the original breadboard signs to mark many of the trails.

The house at 4906 Roland Avenue that we will tour has had many lives. Originally built c. 1900 as a single-family home, it has spent much of its life as a place of learning. By 1946 it had become the Homeland Academy, followed in the 1970s by the School of Contemporary Education. In 1994, The Odyssey School opened its doors for the first time for children with language learning differences. In 2000, The Odyssey School moved to its current home in Stevensonville. The Baltimore Lab School, an off-shoot of the Washington DC Lab School, set down its first roots in this house on Roland Avenue until moving to the Old Goucher College building in Baltimore. In 2005, the house was purchased by Alfred and Elissa Strata, who had the arduous task of converting the long-time school back into a single-family home. Ms. Strata will share her tales of discovery and woe in bringing this beautiful turn-of-the-century home full circle to its original purpose.

Around 1900 the curving streets and extensive landscaping of the “garden suburb” provided an attractive alternative to the stately rows and squares that had long housed Baltimore’s elites. Roland Park was by no means the first garden suburb, even in Baltimore (see Sudbrook Park), but it was the most fully realized, with its streetcar line, parkway entrance, country club, architectural (and racial) covenants, and innovative shopping center. Built in 1895, the half-timbered shopping center with its flamboyant Flemish gable, housed essential neighborhood shops below and doctors’ and dentists’ offices above. What was new is that all this was set back from the street – to give parking space for the automobiles that were soon to choke the old gridded city. A dentist has decided to restore this to it’s previous glory and it will be used to house his practice and other medical offices. It will take some time for the restoration since everything has to be approved by the historical board but he is up for the challenge. This is why I moved here he has told the neighbors.

Under the leadership of Edward H. Bouton, the Roland Park Company not only built Guilford, Homeland, and Original Northwood for Baltimore’s upper middle class, but participated in plans for worker housing during the two world wars, planning more modest garden suburbs at Dundalk and Cherry Hill.

This edition of the Baltimore Building of the Week from Dr. John Breihan, highlights an architectural style as common for detached houses of Baltimore’s outer neighborhoods as the Italianate Rowhouse is to the neighborhoods close to downtown,

The exposed timbers of the Stick Style, found on last week’s Mt. Washington Presbyterian Church, were one way that American builders broke free of the French and English Victorian deigns of the late 19th century. Another way, also based on the abundance of wood for building in North America, was the “Shingle Style.” The origin of the name is unmistakable – buildings (primarily houses) were covered in “cedar shake” shingle siding, allowed to weather naturally. In New England, this meant gray, in Baltimore’s climate dark brown. Other “natural” materials included slate roofs and fieldstone foundations and chimneys. Shingle designs also feature large geometrical masses, like big triangular gables and cylindrical turrets. The gambrel-roofed house depicted here stands in Roland Park, Baltimore’s first “garden suburb.” Developed in the 1890s it broke free of the grid pattern of streets in favor of leafy lanes that mirror the underlying natural topography.

This week’s edition of the Baltimore Building of the Week takes us to North Baltimore at the edge of Roland Park to appreciate an autumn photo of the Greenaway Cottages designed by architect Charles E. Cassell (ca 1838-1916) in 1874.

These three cottages along 40th Street epitomize the Victorian Gothic style: polychrome stone and tile, steeply gabled roofs, deliberately asymmetric plan. Originally identical, the three cottages have each been altered over the years in different ways. They were built in 1874 as summer retreats for various branches of the wealthy Greenaway family – who made their way north when they wished to flee from the heat of their mansion on Mount Vernon Place. The cottages are currently owned and well maintained by Roland Park Place.