For the past two years, Baltimore Housing has worked to find developers for unique vacant properties through their Vacants to Value Surplus Sale. In 2015, Baltimore Housing listed 18 properties for development including historic school buildings, firehouses, and rowhouses located in neighborhoods across the city.

Earlier this week, we learned that the city has issued awards for seven properties including the former Druid Health Center/Home of the Friendless in Marble Hill and the Upton Mansion. In a press release, Deputy Commissioner of Land Resources Julia Day praised the variety and care the city saw from the selected developers: “From rental and market rate housing projects to a music & arts complex for youth and studio space aimed at Baltimore’s budding music scene – the applications were well thought out and sure to enhance our City assets.”

There is plenty of work ahead for the developers putting these vacant historic buildings back into use but the announcement is still encouraging news. The properties and developers include:

Baltimore Housing is encouraging developers interested in  any of the remaining 2015 surplus properties to send in an unsolicited bid by March 31, 2016. These remaining properties include:

You can find more information about any of these properties from Vacants to Value or contact Baltimore Housing at 410-396-4111. To help encourage the development of these buildings, we created a new map highlighting auctions, real estate listings, and development opportunities in Baltimore City. Please take a look at the opportunity map and get in touch with your thoughts on how we can keep improving this new resource. 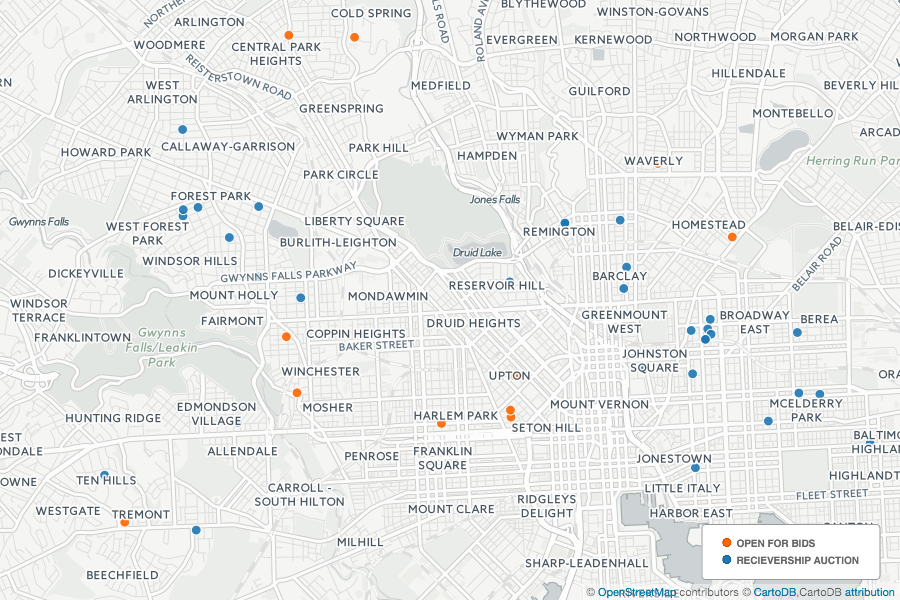 After decades of neglect, it takes a bit of imagination to look at the cavernous A. Hoen & Co. Lithography Plant and see a unique opportunity for neighborhood revitalization. Fortunately, an exciting partnership between the American Communities Trust, Humanim, East Baltimore Development Inc., Big City Farms, Historic East Baltimore Community Action Coalition Inc., Woodberry Kitchen and Johns Hopkins (whew!) is leading the way to transform the plant and the nearby Eastern Pumping Station site into the new Baltimore Food Hub. By fall of 2014, these long vacant historic buildings will be bursting with entrepreneurs, urban farmers, students, and job trainees working with food-related businesses and learning about healthy food and sustainable agriculture.

The A.  Hoen Co. Lithography Plant includes a series of buildings from the mid 19th century through the turn of the 20th century and remained in use by the company up through the 1980s. Established in the 1840s, owner August Hoen became a pioneer in both the technology and business of printing – distributing affordable color maps, books, decorative prints and more across the country. Built in 1890 just a few blocks away on the opposite side of the railroad tracks, the Eastern Pumping Station was once stylish industrial landmarks in northeast Baltimore even rivaling the architecture of the nearby American Brewery Building (then known as the Bauernschmidt and J.F. Weissner Brewery) with a more dignified Romanesque style. Architect Jackson Gott who designed the Pumping Station completed a number of projects for Baltimore City included the Maryland Penitentiary in 1893 and the Southern District Police Station in 1896.

Join us to discover more on the fascinating history of both buildings and the exciting future of food and healthy living that their preservation and re-use promises for East Baltimore! Our tour guides will include project manager Gregory Heller from Econsult and Bill Streuver, President of the American Communities Trust.

We Are Living in a Materials World: Examining How Building Materials Age (Virtual Talk)