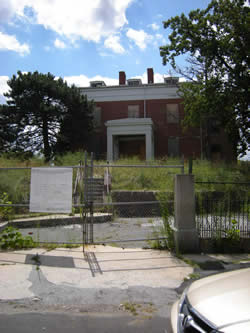 Constructed in 1838, Upton Mansion at 811 West Lanvale Street is significant architecturally as a rare surviving nineteenth century Greek Revival country house. The mansion is located two blocks east of historic Lafayette Square in West Baltimore and is a contributing structure in the Old West Baltimore National Register Historic District. It was added to the city’s historic landmark list in 2008 and was included in the 2009 list of the most endangered buildings in the state by Maryland Magazine and Preservation Maryland. The City of Baltimore owns the building, which has been vacant since the Baltimore City Public Schools left in 2006.

Vandalism and neglect are the two largest threats to the Mansion: the exterior ironwork has been removed for safekeeping and the interior was badly damaged when vandals tore open walls to remove copper wiring and plumbing. It is clear that a continuous use must be found for the building to remain standing.

Historically, Upton has served as the home of a prominent attorney and U.S. Senator (David Stewart), the headquarters of Maryland’s oldest radio station (WCAO, first licensed in 1922), and the home of the Baltimore Institute of Musical Arts, a pioneering African-American musical conservatory. Although the architect of the mansion is not known, Robert Cary Long, Jr. is a likely possibility.