I am very sad to report that Karen Lewand, our friend and long time board member, passed away yesterday evening. Karen was an innovator, a leader, and a strong advocate for preserving Baltimore’s historic buildings and neighborhoods and helped Baltimore grow in countless ways. With an unwavering voice for preserving the best of our architecture and neighborhoods, she was instrumental in saving historic places that many of us now take for granted. Baltimore Heritage recognized her exceptional leadership this past summer by awarding her our 2012 Douglas Gordon Award for lifetime achievement. This fall, she generously gave to help Baltimore Heritage launched the Karen Lewand Preservation Education Fund that will remain a living memorial to her work.

I wanted to share a few stories of Karen’s life and work that help illuminate the love and devotion that this remarkable woman carried for her city and her family. Born Karen Elizabeth Schultz in Detroit, Michigan, Karen received a B.S. degree from the University of Dayton in 1967, and an M.A.S. degree from the Johns Hopkins University in 1988. She arrived in Baltimore in 1977 and, after serving nearly 10 years in the Office of Financial Development at Johns Hopkins, dedicated the rest of her professional and volunteer life to her two loves, the history and architecture of the city of Baltimore.

After taking several courses in preservation at Goucher College, Karen became involved with Baltimore Heritage. She quickly became a leading member and spent 27 years serving on our Board of Directors. Karen founded the Education Committee and developed some of the city’s first walking tours of historic neighborhoods that have grown into our the many heritage tours we have today.

In her own neighborhood of Radnor-Winston, Karen fought for the preservation and reuse of the Victorian Gallagher Mansion, which had fallen into ruin under its previous owners. She and her neighbors succeeded in saving the building, now the Gallagher Mansion Apartments, which won a Preservation Project Award from the Maryland Historical Trust in 1997. Karen also served on Baltimore’s Commission for Historical and Architectural Preservation where she played a key role in preventing the demolition of the Hinson Westcott Dunning factory and offices at Charles and Chase Streets (since renovated and re-used).

Karen’s passion for preservation included a commitment to sharing our city’s history with the next generation. In 1981, She developed a course for schoolchildren teaching local history through architecture. The following year CHAP received a grant from the National Endowment for the Humanities to take the course, entitled “Neighborhood Discovery,” to 23 Baltimore City public schools. Karen subsequently worked at the city’s Planning Department researching and writing neighborhood histories. Some of these appeared in her book, North Baltimore: From Estate to Development, published jointly by the University of Baltimore and the Baltimore City Department of Planning in 1989.

At the state level, Karen served for nearly two decades as a member of the Maryland Historical Trust. She was also one of the first organizers of coalition of preservationists, developers, and conservationists who in 2000 founded the statewide smart growth advocacy group, 1000 Friends of Maryland. In 2006 she was presented the Lucien E.D. Gaudreau Award recognizing her “outstanding contribution to the built environment in the Maryland region,” and just this month was given a 2012 award for leadership and service by the Governor’s Sustainable Growth Commission.

From 1992 to 2012, Karen served as executive director of the Baltimore Chapter of the American Institute of Architects, which under her leadership has been ever more committed to preservation. In 2001, she was awarded the American Institute for Architects’ Richard Upjohn Fellowship for her contributions to the profession of architecture. Seven years ago, in collaboration with several members of AIA Baltimore, she launched the annual Architecture Week in October, which has brought a number of prominent preservation advocates to speak. As a tribute to Ms. Lewand’s leadership, the chapter dedicated and named the chapter house located at 11½ West Chase Street in her honor.

Karen is survived by her beloved husband of 45 years, Robert Lewand, as well as two daughters, Elizabeth Lewand of Brooklyn, New York and Stephanie Lewand of Baltimore. Other survivors include her brother David Schultz of Chelsea, Michigan, as well as one nephew and three nieces, son-in-law Chris Gray and sister-in-law Becky Schultz.

Karen’s family is planning the funeral service and we will have further details soon. We are humbled that Karen requested that, in lieu of flowers, donations be made in her name to the Karen Lewand Preservation Education Fund that she established at Baltimore Heritage this fall. 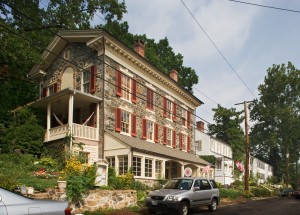 On Tuesday, the Secretary of the Department of Interior Ken Salazar celebrated Women’s History Month with an appearance in downtown Baltimore at the Maryland Women’s Heritage Center, just one week before Baltimore Heritage’s Behind the Scenes Tour there (Saturday March 31, 2-3 pm).  Joined by Mayor Stephanie Rawlings-Blake and Judge and First Lady Katie O’Malley, Secretary Salazar noted a serious underrepresentation of historic sites associated with women’s history, and articulated a vision for getting more of these places designated as National Historic Landmarks and listed on the National Register of Historic Places.  In one example, the Secretary noted that of the country’s National Historic Landmarks, a designation that the Department of Interior bestows on buildings with the highest level of national significance, only 4% are places with significance to women’s heritage.

As the Secretary of the Department of Interior, Mr. Salazar oversees numerous agencies that are responsible for heritage sites, including the National Park Service that manages the National Register of Historic Places and the National Historic Landmark program.  In his vision for the near future, Secretary Salazar said that as the National Park Service gears up to celebrate its centennial anniversary in 2016, he is committed to launching a national dialogue over women’s heritage sites to create a blue print for how to bring these to a higher level of prominence and visibility.

Citing Maryland as a national leader in the role of state governments to promote women’s heritage, the Secretary also said that he is committed to more full federal funding for State Historic Preservation Offices as a way to  make sure that smaller places and ones with more local significance also receive assistance.

Baltimore Heritage will wrap up Women’s History Month with a tour of the Maryland Women’s Heritage Center on Saturday, March 31.  The tour is from 2-3 pm at the Center: 39 West Lexington Street, in the historic former BG&E Building.  The cost is $10.  Register online today.