In addition to invoking more than a little mystery of rituals and clandestine meetings, Maryland’s Masons have been collecting important pieces of history for hundreds of years. Maryland Masons established a collection in the 1830’s to preserve relics associated with heroes of the American Revolution. The collection parameters were later expanded and the museum accumulated a vast array of material that encompasses not only Masonic-related objects, but also items that were deemed important to preserve for posterity.

Highlights of the collection include the desk that George Washington used to resign his commission as Commander-in-Chief of the U.S. Army in 1783 in the Old Senate Chamber of the Maryland State House, as well as a rich collection of items that belonged to Baltimore philanthropist and Maryland State Treasurer Thomas J. Shryock (1851-1918). The museum also boasts one of the most extensive and comprehensive collections of Masonic regalia in North America, dating back to 1775. As a result of an ongoing inventorying of the collection, many items have been rediscovered, including Thomas Jefferson’s paper knife given to the museum in 1959 by the widower of Jefferson’s great granddaughter, Sarah Randolph Hammerslough (1871-1959). Museum Curator Edward Heimiller will lead our tour and will help us better understand the origins, beliefs, and history of the freemasons. 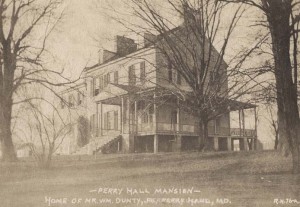 Join us for a tour of the 139-year-old McDonogh School.  We will be venturing into Baltimore County to see a campus that has its roots in Baltimore City and was originally intended to be located there.  The school’s archivist, Ms. MaryLu Greenwood, and Vice Principal, Mr. Larry Johnston, will lead us on a tour of the school and its classical architecture and share the story of how this one time farm school for indigent “boys of good character” became the venerable private co-ed school it is today.

John McDonogh, a Baltimore-born merchant and philanthropist, was born in 1779 and died in 1850, bequeathing half of his estate to the City of Baltimore to educate children. However, since the public school system already existed in Baltimore, the mayor and city council used the funds to endow a “school farm” for poor boys of good character. Mr. McDonogh had envisioned such a school in his handwritten will dated 1838. In 1872, a tract of 835 acres—essentially the same land that comprises the campus today—was purchased for $85,000 for the school’s establishment.  McDonogh School was founded on November 21, 1873 with the arrival of twenty-one poor boys from Baltimore City. From the beginning, the boys followed a semi-military system, which provided leadership opportunities and ensured order.  Major milestones in McDonogh’s history signaled change. The first paying students arrived in 1922 and day students in 1927. The semi-military program was dropped in 1971, and the first female students enrolled in 1975.  Today, McDonogh is a non-denominational, college preparatory, co-educational day and boarding school. The school calls many accomplished athletes alumni.  They include tennis-pro and sports commentator Pam Shriver, Orioles pitcher Brian Erbe, and equestrian Olympic gold medalist Bruce Davidson.

This week’s Baltimore Building of the Week from Dr. John Breihan is an unusual dwelling type that can be found throughout the country– the Octagon Houses inspired by Orson Squire Fowler. More information on this fascinating example of American vernacular architecture can be found in the Octagon House, 1850-1860 by Deborah Holmes.

In 1848 the polymath Orson Squire Fowler of upstate New York (presumably not related to Baltimore’s Lawrence Hall Fowler) published A Home for All, a book extolling an octagonal floor plan as the most desirable residence. Later editions also extolled a primitive form of concrete construction. In this era of eclectic architecture, other free-thinkers were inclined to try it out. There is a particularly fine single-family octagon in Lutherville. Within today’s city limits, Rev. Elias Heiner of the German Reformed Church built an enormous octagon for the Mt. Washington Female Seminary, which occupied it between 1855 and 1861. For about a century the hilltop octagon housed Mount St. Agnes College, until it merged with Loyola University in the 1970s. It now is part of the Mt. Washington Conference Center. Across Smith Avenue at the foot of the hill stand two unusual octagon duplexes (demi-octagons?), reflecting perhaps a Baltimore tendency to turn anything into a rowhouse.