Baltimore Heritage’s Legacy Business Program highlights the city’s businesses that have survived for over 100 years and are still going today. Just as much as our harbor and our great neighborhoods, Baltimore’s longstanding businesses are a central part of what makes our city unique. 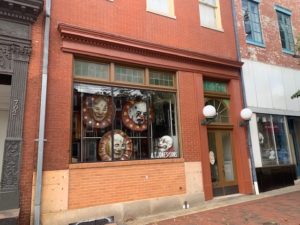 Alfred Thomas Jones started renting out costumes in 1868. He arrived in Baltimore from North Carolina in the spring of 1861. He was there to collect a $500 prize for a painting he submitted to a contest sponsored by the predecessor of the Maryland Institute College of Art (Maryland Institute for the Promotion of the Mechanic Arts). He was unable to return to N.C., however, after fighting broke out at the start of the Civil War. So, he settled into a new life as a teacher at the art school that awarded his prize.

Jones began buying costumes as a hobby in 1868. He purchased Confederate and Union army uniforms as well as parade and masquerade ball costumes. These costumes served Mr. Jones well as he was able to rent them for masquerade balls, a popular form of high society entertainment in the late 19th century. A costume from one season could be altered and rented the next. 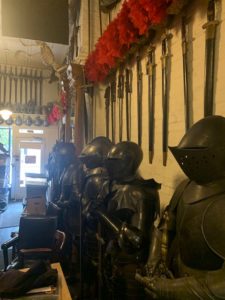 Perhaps the largest of the masked balls of the late 19th century was the Oriole Pageant, sponsored by the Order of the Oriole. The first of these pageants was held in 1880 to celebrate the 150th anniversary of the settlement of Baltimore. The following year the society outdid itself with a three-day affair that included a parade through the city (illuminated with electric lights), concerts, a parade of boats in the harbor, and, of course, a masked ball. The B&O Railroad added extra cars to accommodate the crowds attending the festivities. All of these events required costumes, some of which were rented out by Mr. A.T. Jones.

The costume rental business included supplying local theatre companies. Many of the famous actors of the 19th century depended on the Jones family. Edwin Booth, the most illustrious of a Maryland family of actors, gave Jones some of his own props and costumes, such as a sword used in Hamlet and pound-of-flesh scales from Merchant of Venice. 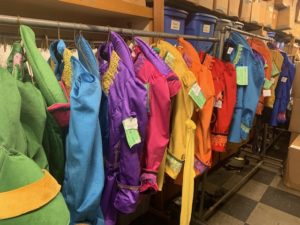 The most loyal and long lasting customer of A.T. Jones & Sons is the Gridiron Club, a journalistic organization in Washington, D.C., made up primarily of news bureau chiefs. It was founded in 1885 and has been renting costumes annually since 1888 for their white-tie banquet that includes satirical skits directed at politicians and journalists. Some of the costumes for this event have been worn by John Glenn, Ronald Reagan, Bill Clinton, and news reporter Bob Schieffer.

A.T. Jones began by renting costumes for parades, pageants, and theatrical productions, as well as formal wear to young men who could not afford to purchase them. Through the next century and a half, his descendants and successors have adapted to the times and changing demands. From A.T., the shop went to his son, Walter Jones, Sr., then Walter’s widow, Lena, then their son, Walter “Tubby” Jones, Jr. The shop was eventually purchased by a long-time employee, George Goebel. His son Ehrich joined the business and has expanded the market to include opera and theatre companies throughout the United States. The inventory now includes everything from Aida to Elf the Musical. 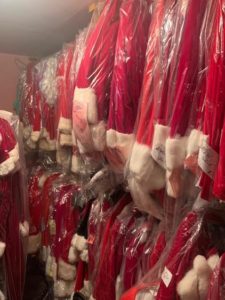 The one costume that is of great demand every year is for Santa Claus. Ever since the first department store version of the fat, jolly, white-bearded old man made its appearance in the 19th century, there has been a run on large red suits with white trim every December. A.T. Jones is always ready to meet the demand from department stores and charitable organizations for Santa costumes.