Did you notice that Baltimore’s Battle Monument at Calvert and Fayette Streets was recently covered in scaffolding and black tarps? What’s happening is a whole-monument restoration effort in advance of the commemoration of the War of 1812 beginning next year. Thanks to the Baltimore Commission for Historical and Architectural Preservation and monument restoration specialists S.A.T., Inc., we have a rare opportunity to peek behind the tarps, so to speak, to learn about the monument close up and how the experts are going about restoring nearly 200 year old marble, iron, and bronze. Please join us!

Please Note: Due to very real space constraints at the monument site, space on this tour is limited to 25 people. Sorry! We’ll fill up on a first to RSVP, first served bases. This is a hard hat tour that may include climbing a few stairs on scaffolding. We will supply the hard hats. 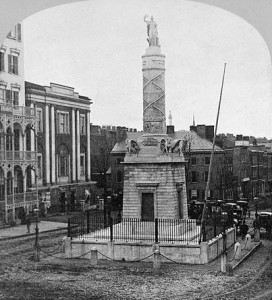 The Baltimore Battle Monument was designed and built to commemorate the Battle of North Point, a turning point in the War of 1812. The monument is the first one erected in the United States to commemorate the sacrifices of the common soldier. It was designed by architect Maximilian Godefroy and built from 1815 to 1825. The sculpture on top is by Antonio Capellano. The memorial was built on the former site of the original courthouse in Baltimore, on what is known as Court Square. It’s not only centrally located physically, its image adorns both the city flag and the seal of Baltimore. The monument itself is built with a brick core that is clad in white marble. The Egyptian Revival base is made from local Cockeysville marble, while the upper columnar shaft and the statue of Lady Baltimore that stands atop it are made from imported Cararra marble. The base includes carvings that depict the bombardment of Ft. McHenry and the Battle of North Point, and the names of the soldiers who died in these fights are spelled out in bronze lettering in criss-cross bands that wrap up the central column. At the top, 52 feet above Calvert Street, Lady Baltimore holds a victory wreath.

Nearly 200 years of Baltimore grit and grime, however, have taken their toll. Seventy-five percent of the joints at the base have experienced some failure, the stones at the base platform have shifted and cracked due to settling, and there is significant granular deterioration on the side that faces the harbor from wind and airborne salts. And that’s on top of the general grime from Baltimore’s industrial and automobile generated pollution! Plainly speaking, Lady Baltimore is losing her nose and the monument desperately needs a thorough going over. And that’s where CHAP and S.A.T. come in. As part of CHAP’s ongoing (and innovative) citywide monument restoration program, Steve Tatti and S.A.T., Inc. were brought down from New York for the restoration project. The work will include casting molds of Lady Baltimore and other significant features, extensive repointing and cleaning, resetting dislodged stones, and treating and re-painting the iron and bronze elements around the base. For our tour, Steve Tatti of S.A.T. and Kathleen Kotarba, director of CHAP, will explain the history and significance of the monument and show us up close how it is being restored.