As rain today and tomorrow keeps our We Dig Hampstead Hill project team inside (catching up on all of the less glamorous paperwork!), we’re excited to share a few results from our second successful week in the field, what archeologist Greg Katz says is, “Good stuff, and more good stuff to come!”

Last week, we welcomed five school groups for a hands-on field trip at Hampstead Hill including students from Thomas Johnson Middle School, Morrell Park Middle School, Patterson Park Public Charter School, and Hampstead Hill Academy. Special thanks to our school outreach coordinator Theresa Donnelly for supporting these visits and to Jefferson Patterson Park and Museum (whose “Mystery Objects” learning activity has been a huge hit with these young archeologists-in-training).

We also made great progress in locating the remains of the defensive earthworks and finding some exciting artifacts that connect us to the people who camped along that line during the fall of 1814. Fieldwork Director Greg Katz has shared his perspective on the second week of the project: 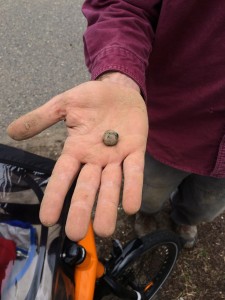 We had strong volunteer support, and we were able to take our test units (started last week) down to 3-4 feet below surface into some very interesting nineteenth-century deposits. We found the eastern and western edges of the tavern structure, as well as the base of the earthen cellar. We recovered lots of interesting artifacts from the tavern excavations, including a large assortment of buttons and ceramic wares, and smaller amounts of bottle fragments and other domestic items. One of my favorite finds from this area is a Goodyear rubber button, probably produced in the 1850s, when the former tavern was home to the Keeper of Patterson Park. Nothing military in nature was found in the tavern structure, which was unexpected.

Some military items did turn up in the test units north of the Observatory, including a gunflint and a musket ball. By the close of the week we were fairly confident that we were near the base of the 1814 fortification ditch in the excavations both north and south of the Observatory. 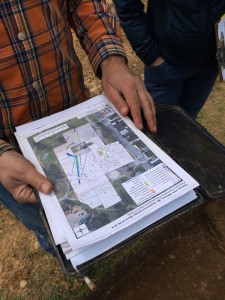 The testing south of the Observatory found some very interesting layers of soil and elements of an older drain system possibly dating to the nineteenth century. A relatively shallow ditch, suggestive of the 1814 fortification ditch, was found approximately 1.5 feet below the ground surface. At the base of the ditch was a small brick storm drain. Approximately two feet lower we encountered another ditch that we think is the actual trench from the 1814 earthworks. Our current theory is that the upper ditch is a historical reenactment of sorts – that at some point in the nineteenth or early twentieth centuries a ditch was dug to recreate the historic rampart. The drain system may have been installed to keep the recreated ditch from filling with water. This may be an example of how each generation of Baltimoreans comes to learn the city’s history, and rediscovers and reinterprets the past. Good stuff, and more good stuff to come!