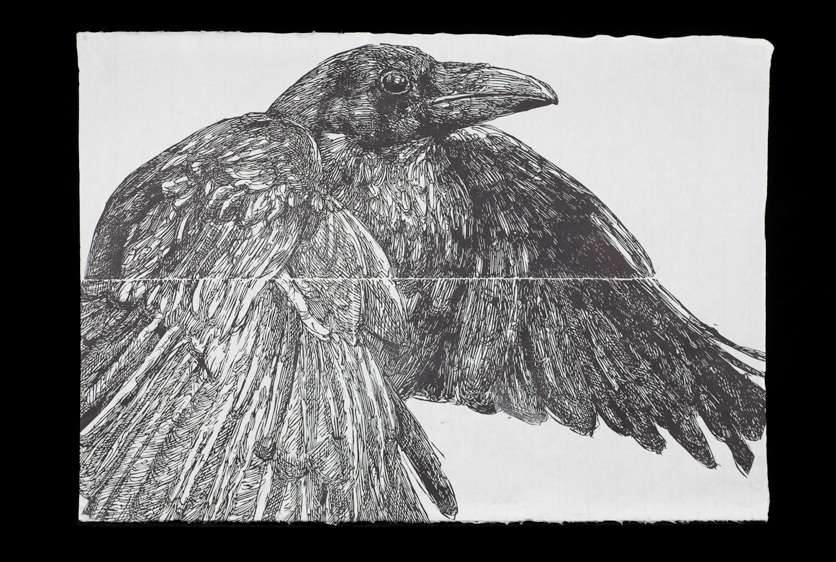 Many of you have heard that after many years of stewardship, Baltimore City is no longer providing funds for the operation, programming and upkeep of the Edgar Allan Poe House and Museum. We are pleased to be a partner in one of the creative efforts underway to raise support for this city landmark. Gaia, a MICA-trained and critically acclaimed emerging artist with gallery shows in Chicago, New York and Washington and street art from Madrid to Seoul, has donated 100 limited edition prints of his block print “The Raven (Forevermore), 2011” to help the Poe House.

We are hosting a special reception with the artist at the historic Railway Express building to learn about the Poe House and raise money for its upkeep through the sale of this generously donated artwork. The invitation-only event is free (even the wine and cheese!) and you will have an opportunity to purchase a print before they go on sale to the public. All proceeds from the sale will go directly to the Poe House. Baltimore art collectors Claribel and Etta Cone had to go all the way to Paris to find up and coming artists like Picasso and Matisse. All you have to do is get yourself to the Railway Express Building. I hope you can join us.

Number 3 Amity Street (now known as the Poe House) was built around 1830 for Charles Klassen. Shortly after, Ms. Maria Clemm moved into the house with her mother, 10 year old daughter Virginia, and her nephew, Edgar Allan Poe (then 23). Maria rented the house largely through a pension from her late father, David Poe, who was Quartermaster General for Baltimore during the Revolutionary War. While Poe lived in the house, he wrote stories that include MS. Found in a Bottle (1833) and Morealla (1835), as well as poems that include Enigma [on Shakespeare] (1833) and The Coliseum (1833). The diminutive 5-room, 2 ½ story brick building has changed little since 1830, including the horse-hair plaster and wooden plank flooring. In 1939, due to public outcry, the Poe House was spared from demolition during the construction of the Poe Homes public housing complex. Today, this National Historic Landmark is the jewel of the complex owned by the Housing Authority of Baltimore. From 1949-1979, the Poe Society operated the museum on a volunteer basis. In 1979, the Housing Authority leased the Poe House to the City so that CHAP could restore and operate this landmark site.

Last year during the budget cutting process the City decided to end general funding support of the Poe House effective July 1, 2010. CHAP and many concerned citizens have been working to find ways to keep it open and keep the roof up, including possibly establishing a non-profit organization dedicated to the building. When MICA graduate Gaia learned about the plight of the Poe House, he generously stepped in to donate 100 limited edition prints of a piece he calls “The Raven (Forevermore), 2011.” Gaia is a street artist who paints large public murals in disinvested neighborhoods to draw attention to urban blight. The Raven (Forevermore) will be for sale at Artscape and on the Poe House website. Prices are $400 unframed and $600 framed per the artist’s specification. Our reception offers a preview and chance to buy a print before they go on sale to the general public.

The reception will be at Urbanite@Case[werks], the gallery & showroom space of Case[werks], a Baltimore company that manufactures exhibit cases and gallery products for museums and libraries from the Smithsonian in Washington to the Alamo in San Antonio. Case[werks] has a great space in the Railway Express Building, a 1929 former mail-sorting facility that was transformed into lofts a few years ago (and won a Baltimore Heritage preservation award in the process).

Please join us and our partners as we learn about the Poe House and Gaia’s work to transform disinvested neighborhoods, and perhaps grab up a limited edition piece of art.