Tuscany-Canterbury by Foot: The Masterworks of Architect Clyde Nelson Friz 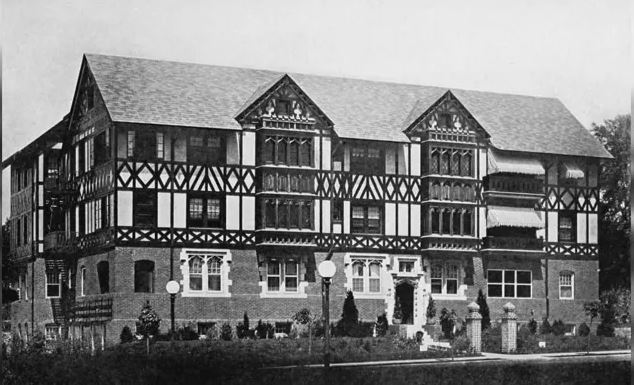 Architect Clyde Nelson Friz may be be known for the Beaux Arts designs of his later works—the Pratt Library Central Branch and The Scottish Rite Temple (both begun in 1928)—but he was already a self-made man when he arrived in Baltimore right before the turn of the century. He found plenty of demand for his trade after Baltimore’s Great Fire of 1904 and the burgeoning residential growth of the city as it pushed into the surrounding farmlands. One such area was the Tuscany-Canterbury neighborhood—a 90-acre residential treasure, just north of Johns Hopkins University Homewood Campus, celebrating its centennial this year.

Friz was deeply involved in helping to form the character of the neighborhood, where he lived and designed its architecture over several decades (between the 1910s and the 1930s), drawing from such Revival styles as Half-Timbered Tudor, Italian Renaissance, and the Mediterranean. Few may know of these tucked away projects today, but at the time, Friz received numerous accolades through national architectural publications.

Join us on a walking tour to explore some of Baltimore’s most significant apartment houses. Our tour guides are Jillian Storms, AIA, who has been studying Clyde Friz’s life and grew up in the neighborhood, and Baltimore historian Charlie Duff. The tour will begin at The Scottish Rite Temple and include The Tuscany, The Lombardy, and The Gardens of Guilford. We’ll be treated to a peek inside numerous apartments, including the maids quarters that made this genteel living possible in its day.

Please note: This tour will involve hilly terrain and stairs. The apartment houses on this tour do not have elevators.

Explore all five of our spring Baltimore by Foot walking tours. Our Baltimore Behind the Scenes Tours program has been funded by Mayor Catherine E. Pugh and the Baltimore Office of Promotion and the Arts.