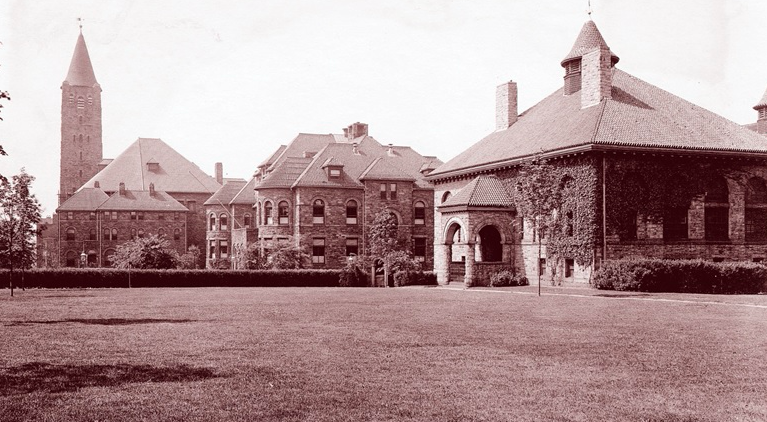 While Rev. John Goucher was overseeing the building of today’s Lovely Lane United Methodist Church in the mid-1880s, he was also helping establish a college for women to give them “equal advantages in the business of life.” Founded in 1885 as the Woman’s College of Baltimore City (“City” was dropped in 1890), it began with a few stone buildings and the spirit to become one of the leading institutions of higher education in the country. The College expanded its campus from 22nd to 24th Streets, and from Calvert Street to Maryland Avenue to eventually include twenty-six buildings for academics, physical training, student life, and presidents’ homes. In 1910, the name was changed to Goucher College to honor John and Mary Goucher.

By the second decade of the 20th century, increased traffic and restrictions on expansion led the College to purchase land in Towson in 1921 to create a more open environment for its growing student body. Construction was delayed until the early 1940s, and Goucher maintained two campuses until its final move in 1954, after selling its downtown buildings to various individuals and organizations.

Join Marilyn Warshawsky, author of John Franklin Goucher: Citizen of the World and a trustee emerita of the College, at Lovely Lane for a tour of this historic church, a presentation of archival photos of original college buildings, and a walking tour of the campus that is now part of the diverse community known as Old Goucher.

Explore all five of our spring Baltimore by Foot walking tours!