Join us next Wednesday for a tour of G. Krug & Son Ironworks and new museum. G. Krug is the nation’s oldest operating ironworks, and after 200 years has added an ironworks museum to its ongoing iron working business. G. Krug’s original work (and newer restoration work) can be found on local landmarks like the Otterbein Church, Baltimore Basilica, Washington Monument, and the Baltimore Zoo. In 2012, the fifth generation Krug family that now owns and operates the business added a museum to highlight the rich history of the family business and a collection that includes archival ironworks blueprints and rare pieces of century-old ironwork. Please join us for a tour of this 200 year old ironworking facility and new museum space on Saratoga Street. 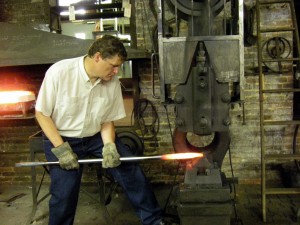 Maryland first began to flourish as an ironworking center in the 1720s when the Principio Furnace opened in Cecil County and another furnace opened along the Gwynn’s Falls in Baltimore County. With the availability of iron and skilled labor to work it, G. Krug & Son was started in 1810 by Augustas Schwatka. In 1830, Andrew Merker bought the company and listed it as a “bell hanger and locksmith” firm. Gustav Krug, the Krug family ironworking progenitor, came to Baltimore in 1848 and began working for Merker. In 1871, Krug became the sole proprietor of the business and eventually changed its name to the current G. Krug & Son. The firm is the oldest continuously operating ironworks in the country, and it still fabricates artistic ironwork in the same building where it was founded in 1810. Krug staff, including Peter Krug, a fifth generation Krug ironworker, will lead our tour of this 200 year old facility and introduce us to their new Baltimore museum!