We all know the “Castle on the Hill.”  Many of us spent a good part of our young lives there. Now please join us in walking through and learning the quintessential Baltimore history of this much beloved city landmark. And, yes, Poly grads are welcome too! 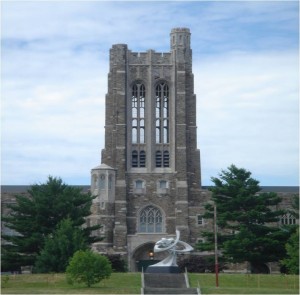 Founded in 1839, City College is the third oldest public high school in the United States. Through an act of the Baltimore City Council in 1866, the school became known as “The Baltimore City College.”  It relocated a number of times in buildings downtown during its early years and moved to its current building at 33rd St. and The Alameda in 1928. At a cost of nearly $3 million raised largely by the alumni association, the Gothic stone building that now houses City College was designed by the architecture firm of Buckler and Fenhagen. (This firm, which is the precursor to the current Baltimore firm of Ayers Saint Gross, also designed the mausoleum at Green Mount Cemetery where Bromo Seltzer founder Isaac Emerson is buried, Shriver Hall at Hopkins University, and many public schools throughout Maryland). Originally all male and all white, City College began admitting African Americans in 1954 after the Brown v. Board of Education Supreme Court case. The school began admitting women (against the wishes of the majority of the alumni board at the time) in 1978 after undergoing a massive restoration project. In 2003 on the building’s 75th anniversary, the City College Alumni Association successfully had it added to the National Register of Historic Places and led an effort to keep cellular telephone transmitters from being installed on the building’s tower. In 2007, the alumni successfully had it added to Baltimore’s own historic landmark list, and won a historic preservation award from Baltimore Heritage for their multi-year effort. Please join us and our tour guide, Mr. Neil Bernstein of the Alumni Association and a leader in the preservation efforts over the last decade, to learn about this true city landmark and its historic and current role in shaping Baltimore.

This tour series is made possible in part by a generous contribution from the Baltimore Office of Promotion and the Arts and the Maryland State Arts Council. Thank you to our sponsors!