A heritage tour of the 1st Mariner Arena? Yes! Built in 1962, the 1st Mariner Arena is celebrating its 50th year and has a marvelous history. Please join us as we wander backstage and peek into the building’s nooks and crannies with arena manager Frank Remesch to see where the Beatles played, Martin Luther King orated, and Elvis threw up. 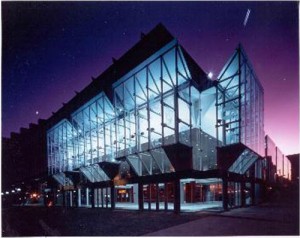 In 1961, the cornerstone of the Baltimore Civic Center (as it was then called) was laid, enclosing a time capsule with notes from President John F. Kennedy, Maryland Governor Millard Tawes, and Baltimore Mayor Harold Grady. Located on the site of the former Old Congress Hall where the Continental Congress met in 1776, the arena opened a year later to great acclaim as part of a concerted effort to revitalize downtown Baltimore. Through ups and downs and a number of renovations, the arena has become woven into the fabric of the city. In its early years, Baltimore’s professional hockey team (the Baltimore Clippers) played here, as did the Baltimore Bullets, the city’s former basketball team. In 1966, Dr. Martin Luther King delivered a speech called “Race and the Church” at the arena as part of a gathering of Methodist clergy, and in 1989 the arena hosted the U.S. National Figure Skating Championships. And then there are the concerts. On Sunday, September 13, 1964 the Beatles played back-to-back shows at the arena to throbbing young Baltimoreans, and the arena is reportedly one of the only indoor venues in the U.S. still standing where the Fab Four played. In the 1970s, Led Zeppelin played the arena and shot a few scenes for their movie “The Song Remains the Same” backstage. Also in the 1970s, the Grateful Dead performed many shows here, including a performance where they played the song “The Other One” for a reportedly record forty minutes.

Finally in 1977, Elvis Presley performed at the arena just weeks before he died. The tickets for the show sold out in 2 ½ hours, and although there were no untoward incidents reported while The King was onstage, he did apparently lose his lunch in a corridor in the back. Please join us and First Mariner Arena manager Frank Remesch on a tour of the building, onstage and backstage, to see the inner workings of a 14,000 seat arena and hear some of the stories that it has collected over its half a century in Baltimore. Please also join us after the tour for a drink at Alewife, a bar/restaurant just a block and a half away, to share your stories of the arena.