During the month of May, volunteer archaeologists led by Lisa Kraus and Jason Shellenhamer are carefully digging through layers of history at the Caulker’s Houses in Fell’s Point. Please stop by the weekend of June 1–2 anytime from 11:00 a.m. to 2:00 p.m. to discover what the dig has turned up on our free public archaeology tour of organized in partnership by the Herring Run Archaeology Project, Baltimore Heritage, and the Preservation Society of Federal Hill and Fell’s Point, and the Friends of 612-614 South Wolf Street.

Built as early as 1801, the Caulker’s Houses at 612 and 614 South Wolfe Street are two of the smallest and oldest wooden homes remaining in Fell’s Point. Between 1842 and 1854, the buildings became homes to African American ship caulkers Richard Jones, Henry Scott, and John Whittington. The shipbuilding industry in Fell’s Point depended on free and enslaved black labor and these small homes provide an important reminder of that history. The buildings are also known the Two Sisters Houses after sisters Mary Leeke Rowe Dashiell and Eleanor Marine Dashiell, the last owners before Preservation Society acquired the buildings. 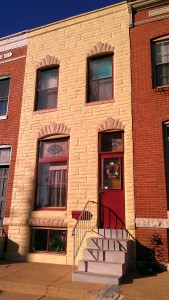 We’re excited to welcome our latest home-owner into the Baltimore Heritage Centennial Homes program with a plaque presentation for Mr. Roland Moskal on Fait Avenue at the monthly Canton Neighborhood Association meeting on March 25.

In 1904, Roland Moskal’s maternal grandmother, Maggie Williams, a widow, purchased a newly constructed rowhouse at 3408 Fait Ave. in the neighborhood of Canton in Baltimore City. She paid off her mortgage 17 months later in 1905. Over the last 108 years, Maggie Williams was followed by three generations of her family who have owned and occupied the property including her grandson Robert Moskal. Read on for the extensive profile of the history of this long-time Canton family and their home. Special thanks to our hard-working volunteer Lisa Doyle for her continuing work on the Centennial Homes program.  If you have information on a Centennial Homeowner in your neighborhood, please contact Lisa Doyle at 410-484-7878 or doyle@baltimoreheritage.org. 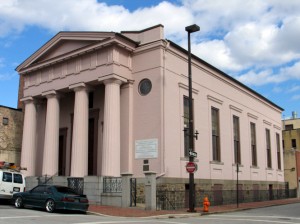 We’re excited to announce the 2012 Jewish Landmarks Photo Competition – a new partnership between Baltimore Heritage and the Jewish Museum of Maryland to celebrate Baltimore’s rich history of Jewish residents, neighborhoods and buildings from Lloyd Street to Park Heights Avenue. Join us next Thursday evening as we kick off the competition with free admission to the Jewish Museum of Maryland and a free photo walk and tour for Late Night on Lloyd Street. Don’t forget to bring your camera!

Local celebrity judges, prizes, and information on how to submit a photo will be announced next week. Late Night on Lloyd Street takes place on the first Thursday of every month and are casual and drop-in evenings. Stop by on your way home from work, bring a friend or come to meet new people. 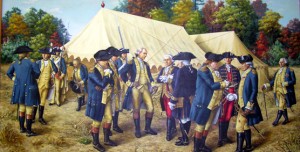 In 1781, French and U.S. troops under Rochambeau and Washington trekked 650 miles from Newport, Rhode Island to Yorktown, Virginia for what became the final major conflict of the Revolutionary War.  A new National Heritage trail, the Washington-Rochambeau-Revolutionary-Route (or W3R for short), is in the making to commemorate this historic event.  Please join us and our partner, the Fell’s Point Preservation Society, for a talk by Dr. Robert Selig, trail consultant for the National Park Service, on the trail and its history, including the contributions of Baltimore and Maryland.

In 1781, General Jean-Baptiste de Rochambeau, America’s great ally in the Revolutionary War, embarked with his contingent of French troops from Newport to confront the British at Yorktown.  General Washington and U.S. forces joined him at White Plains, New York.  When they arrived in Maryland, troops from Baltimore and elsewhere boarded boats to sail down the Chesapeake Bay and rendezvous at Yorktown.  The American victory at Yorktown was decisive:  it resulted in a surrender by British General Cornwallis and forced the British to negotiate peace.  To commemorate the historic march and battle, Congress recently designated the new W3R National Historic Trail to tell the story of the Allied forces in the Revolutionary War, their journey to Yorktown, and what they learned about the colonies they passed through.  Maryland, in particular, played a critically important role and has many sites and stories associated with this journey.  Please join us for a talk by Dr. Robert Selig, the National Park Service’s consultant on the trail, to learn about new information gleaned from French, German and American sources both here and abroad.  Please linger a little after the talk for a tour of the Robert Long House, Baltimore’s oldest residence (ca. 1765) and currently home to the Preservation Society, and in the spirit of the season and Baltimore hospitality, share a glass of eggnog made from an 18th century recipe.  We also invite you to stay in Fell’s Point for dinner, with a 10% discount at the seafood restaurant John Steven around the corner. 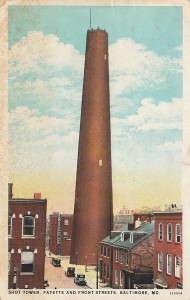 Please join us as we partner with the Carroll Museums for the Phoenix Challenge. No, we aren’t hiking our way to Arizona. Rather, we are hiking up Baltimore’s own Phoenix Shot Tower. The Shot Tower, when it was built in 1828, was the tallest structure in the United States until 1846. Once there were three such towers in Baltimore; now there are only a few left in the entire world. The tour will include a short walk to visit some historic highlights in the surrounding Jonestown neighborhood followed by a tour inside the Tower. We will even have a chance to climb halfway up this iconic structure!

The design of the 215-foot tall Phoenix Shot Tower and its estimated 1.1 million bricks is based on Englishman William Watt’s 1782 patented process of making shot by pouring molten lead through colanders down the open shaft of a high tower. As the molten lead spun and cooled in the air, it became “perfectly globular in form and smooth” as was reported at the time. The “drops” were collected in a large water barrel at the tower’s base, then sorted by size and bagged for distribution. The finished product was called drop shot and was used for small game hunting, among other things. The Shot Tower annually produced 2.5 million pounds of it until 1892 when new methods of shot production made the Tower obsolete. In 1921, permits were granted to tear down the Tower and clear the site to make way for an automobile garage. In one of the first acts of historic preservation in Baltimore, public reaction against the demolition plans was strong, and leading citizens were able to raise funds for its preservation. On October 11, 1924, a group of Baltimore citizens bought the Shot Tower for $17,000 and donated it to the city with the understanding that it would be preserved. More than fifty years passed before the Shot Tower was opened to the public as a museum. In 1973, it was placed on the National Register of Historic Places. Today it is managed by Carroll Museums, a non-profit organization that also manages the Carroll Mansion on nearby Pratt Street.

For our tour, we will meet at the Shot Tower and take a short stroll around Historic Jonestown, one of Baltimore’s oldest neighborhoods. The tour will be led by Urban Rangers from the Baltimore National Heritage Area. The walk will take about an hour. Once back at the Tower, we’ll have a rare opportunity to climb part way up on the wooden stairs that wrap around its interior brick wall. Ms. Paula Hankins, director of the Museums, will talk about the history (and future) of the Tower. Our tour is a prelude to the Museum’s Phoenix Challenge campaign, which has its official kick off just after our tour ends around noon. Crafts and activities will be available to amuse our youngest tour goers, and there will be refreshments for all. The Phoenix Challenge campaign has a goal to raise 1.1 million supporters worldwide – one person for every brick in the tower. I hope you can join us to be among the first.