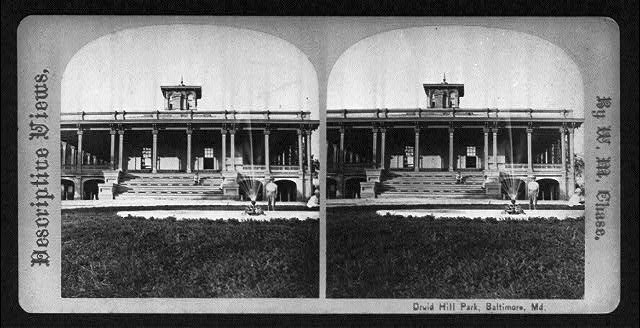 The Mansion House, built by Revolutionary War Colonel Nicholas Rogers, has stood in what is now Druid Hill Park since 1801. The house is the third to stand in this location. Originally a castle known as “Auchentorolie,” built by Rogers’ ancestors, occupied the hill but had burned sometime during the war. Rogers studied architecture in Scotland and most likely became familiar with Druids’ love of nature and hilltops and selected the name “Druid Hill” for his estate. The house was initially planned to be a summer home but during its construction the family home at Baltimore and Light Streets burned and it was decided to use the Druid Hill house year-round. The Mansion remained in the Rogers family until the mid-1800s, when Rogers’ grandson sold the house and lot to Baltimore City for $121,000 in cash and $363,000 in City of Baltimore stock. One stipulation of the sale was that the family burial plot remain property of the family, and the plot is still in place today in the park.

The Mansion House has seen many rebirths. In 1863, during the park movement in Baltimore City, the house was greatly modified. Under the direction of John H. B. Latrobe, it was turned into a pavilion and updated in the Victorian style. By 1935, the porches were enclosed and the house became a restaurant. In the 1940s, the building was used as a day school for the Young Men and Women’s Hebrew Association.  The Zoo, which had begun developing around the mansion beginning in 1867, used the building as its bird house from the 1950s until its restoration in 1978. The restoration efforts took the house back to its 1860s design. Just last year, the Mansion underwent its most recent restoration and repair work, including much needed wood restoration and structural shoring. The building today house’s the Maryland Zoo in Baltimore’s administrative offices and event rental space. Please join us on a tour of the nooks and crannies of the Mansion by the restoration contractor, Tony Azola of The Azola Companies, and a short walk through the history of the Mansion and the Zoo by Ms. Lori Finkelstein, Vice President of Education, Interpretation, and Volunteer Programs (and unofficial historian) at the Zoo.

Behind the Scenes Tour at Rogers Mansion