Our latest guest blog post comes from Bill Barry, long-time Director of Labor Studies at the
Community College of Baltimore County introducing us to the Great Railroad Strike of 1877 and a new historic marker at Camden Station to commemorate the event. We’re also excited to feature a video on the 1877 strike produced for Explore Baltimore Heritage by UMBC student William Carroll for the course Practices in Public History course with Dr. Denise Meringolo.

When I spoke at a gathering of the Occupy Movement at the McKeldin Fountain in 2011, I mentioned that we were on hallowed ground because the original “occupy” movement in Baltimore City occurred in 1877, as tens of thousands of railroad workers carried on the first national strike, shutting down all freight traffic and giving new meaning to the term “reconstruction.” The strike started on July 16, 1877, against the B & O Railroad and the first strike demonstrations were in front of the company’s main depot at Camden Yards.

One aspect of the strike was the military opposition to the strikers, first from state militia in Maryland and West Virginia, and then by federal troops ordered out by President Rutherford B. Hayes, who had been elected, in part, for his commitment to withdraw all federal troops from the states. In a devastating moment, eleven citizens were murdered by the militia near City Hall as the troops tried to march from the armory across from the Shot Tower to Camden Yards. Since this movement is virtually unknown—the Pratt Library catalogues its documents under “The Riots of 1877″—I decided to propose a historical marker in front of Camden Yards, honoring the strikers and their community. 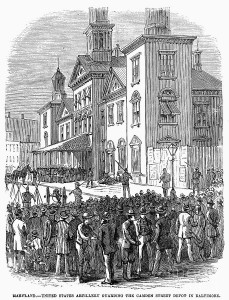 The process for applying for a new marker is available at online at the Maryland Historical Trust website. While proposals generally have to get approval from the State Highway Administration, this one also had to pass the Maryland Stadium Authority because of its unique location. In addition to the usual historical support, I also turned in several dozen letters from high school teachers across the country, who participated in a workshop in July, 2011, about the strike. My partners in this project—Nancy Kurtz from the Maryland Historical Trust and Jan Hardesty, from the Stadium Authority—were wonderful and a process that I was warned could take years was completed in about six months! The state cast (and paid for) the marker, using language I proposed, and the unveiling will be a great event.

1877 Railroad Strike Historical Marker Unveiling
Saturday March 23, 10:30 am
Unveiling at Camden Yards in front of the B&O Warehouse on Howard Street
See the Orioles website for information on parking and transit options. There will be a reception after the unveiling at The Irish Railroad Workers Museum on Lemon Street, across from the B & O Museum. Free parking is available for anyone who RSVPs in advance with Bill Barry at billbarry21214@gmail.com.