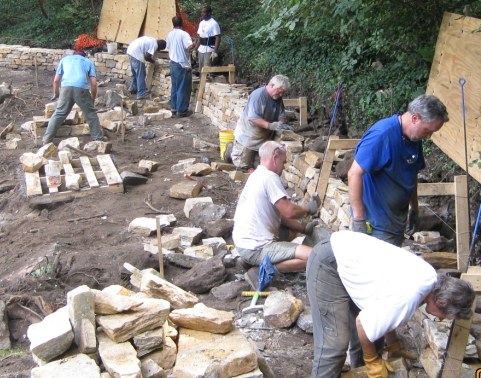 At the risk of stacking too much up back-to-back, we are taking advantage of an offer from the Friends of Maryland’s Olmsted Parks and Landscapes, which has graciously offered to lead us on a tour of historic Wyman Park. With Friends’ members Tom McGilloway and David Holden, we’ll explore this often-overlooked Baltimore park that has its roots in Baltimore’s Carroll family and the landscape architecture firm of Frederick Law Olmsted.

Wyman Park was originally part of the estate of Charles Carroll of Homewood. In 1839, Samuel Wyman purchased the property from Carroll’s son. The Wyman family owned the land until 1902 when they presented it to The Johns Hopkins University. Part of the land was preserved as a city park named in their honor. The tour will include two very different parts of the Wyman Park complex. The first part of the tour will feature Wyman Park Dell which represents a miniature version of the signature Olmsted pastoral park based on a sweeping unobstructed lawn with strong enclosure, dramatic play of shadows and a contrast to the surrounding urban environment. The Dell today is much as it was when originally conceived in 1905. Visitors will see recent master plan implementation successes including the restoration of the dry-stack stonewall surrounding the entire lower lawn and expansion of the park into space, which was once claimed by roadway. The second part of the tour will feature the lower portion of the Stony Run stream valley where stream restoration efforts will soon be under way. Our tour guides will be Tom McGilloway and David Holden, members of the Friends of Maryland’s Olmsted Parks and wonderful tour guides.