Searching for the War of 1812 in Patterson Park 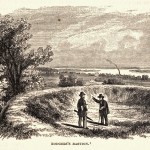 Patterson Park, known as Hampstead Hill in the early 1800s, was the site of Baltimore’s major defensive position against a British land invasion in the War of 1812. In partnership with the Friends of Patterson Park, we are organizing an archaeological investigation of the battlefield to learn more about this largely hidden part of the park’s history. Learn more about this project and how you can get involved.

Through tours and stories and more, we have been celebrating the places and people who stood witness to the Battle of Baltimore and the War of 1812. Enduring landmarks from the War of 1812 include Old Otterbein Church, St. Paul’s Rectory, Clifton Mansion, the Westminster Burying Ground, and Elisha Tyson’s Falls Road. Learn more or visit Explore Baltimore Heritage to take a virtual tour.

In 2014, we are celebrating not just the bicentennial of the War of 1812 but the many of fascinating stories from Baltimore’s early history. Thomas Mills negotiated with city leaders like Isaac McKim over the design of the Washington Monument. Inventor Uriah Brown tested his experimental steamboat prepared to fight the British with metal-plating and a flame thrower. The University of Maryland celebrated their first year in what is now Davidge Hall. Stay tuned for more from Baltimore 1814!