Explore stories of the Afro chaplain, the only city park named in honor of a crossing guard, and the oldest Jewish orphanage building in the United States.

In the early 20th century, rural estates west of Fulton Avenue gave way to new developments like Dukeland Park and Edmondson Heights. While the original names for West Baltimore neighborhoods are little-known today, the classic tile-roofed rowhouses built by entrepreneurial builders still fill every block in this neighborhood. In the 1950s and 1960s, a new community of African American residents won a tough fight against a proposed expressway and saved the neighborhood.

“I married, baptized and buried many of them down there — matter of fact they call me the AFRO’s chaplain.”
Reverend N.B. Carrington, August 1967 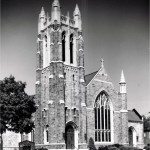 When Rev. E.P. Fellenbaum dedicated the new Harlem Park Methodist Episcopal Church in 1926, the wealthy congregation had already occupied three buildings in only 50 years. Some church members criticized the building’s $100,000 mortgage as “Fellenbaum’s Folly.” Less than 30 years later, the church moved west again and sold the Gothic Revival building to the Union Memorial United Methodist Church. Led by Reverend N.B. Carrington, a pressroom supervisor at the Afro-American Newspaper, the congregation grew from less than 100 to over 600 members by 1961 and paid off the mortgage in only 8 years.

St. Edward’s organized in 1878 as a mission of St. Peter the Apostle, which was led by Fr. Owen B. Carrigan. Carrigan supervised the construction of the first church in 1880 for a congregation that likely included Catholic workers from factories scattered across the Gwynns Falls Valley. In 1923, the church expanded with a new school, convent, and rectory. A growing congregation of 5,000 people forced the church to hold nine masses every Sunday. In 1938, the congregation started a campaign for a larger building and dedicated the present church on March 9, 1941.

Helen Mackall Park on Edmondson Avenue was named in honor of Mrs. Helen Mackall on December 4, 1971. While serving as a crossing guard for James Mosher Elementary School, Mrs. Mackall lost her leg saving the life of 6-year-old Bonita Lynn Lineberger at the corner of Lafayette and Wheeler Avenues. First established in the 1930s, the park was originally dedicated as the Nichols Playground in honor of George L. Nichols, a long-serving superintendent with the Baltimore Department of Recreation and Parks who retired in 1945.

“Dukeland,” the country home of General John Summerfield Berry, inspired the name of the Dukeland Park Company. In 1906, this early developer unveiled plans to build 200 cottages. The Baltimore Sun reported: “To make this suburb an attractive one, the company has issued a number of restrictions… No stores, no saloons and no colored people are allowed.” In 1913, notable builder James Keelty took over the development and helped pioneer a style of “daylight” rowhouses (built just two rooms deep to make a window in every room). Discrimination against black renters and homeowners was common until the decades after WWII when civil rights activists won the fight to abolish racial covenants.

“This is a new and finely located ‘place for the dead,’” The Iris wrote in 1846. Not affiliated with any one church or religion, Western Cemetery sold lots at affordable rates and, like Green Mount Cemetery, tried to create a park-like open space for visitors to stroll. In the 20th century, the cemetery, along with nearby Leakin Park, took center stage in West Baltimore’s highway fights. Relatives of the interred joined forces with environmental activists and local residents in opposing the extension of a proposed highway through Leakin Park and into the city. 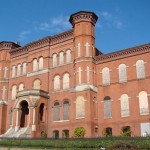 Turrets on every corner make the Hebrew Orphan Asylum look like a small castle on a hill. Designed by local architects Edward Lupus and Henry A. Roby, the 1876 building has stood witness to over 130 years of history. An orphanage for Jewish children organized in 1872 operated in the building through 1923. Soon after the children left, a group of doctors bought the building and established the West Baltimore General Hospital. Later used as the Lutheran Hospital of Maryland and a nursing school, the building was abandoned when the hospital closed in 1989. Today, the Coppin Heights Community Development Corporation is leading an effort to restore this unique landmark.