The Baltimore Centennial Homes project, developed in collaboration between Baltimore Heritage and City Councilman James Kraft, recognizes families that have been in the same house for 100 years or more. These families have anchored Baltimore’s historic blocks and neighborhoods through good times and bad. Their stories show the changes that our communities and our city have experienced as well as the critical roles that neighborhoods and their families have played in keeping historic neighborhoods thriving. 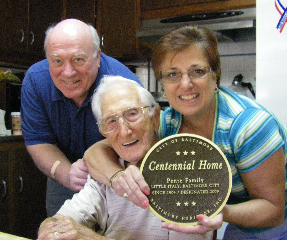 The following Centennial Homes families kindly worked with Baltimore Heritage volunteers to develop short family profiles about their roots and their long histories in Baltimore.

On June 19, 1919, Sharon VanDyke’s grandparents, Harry and Edna Shivers, bought 406 E Randall St. in Riverside. Their daughter, Devera Steltz, then occupied the home in the 1960’s. In 2022, this quintessential Baltimore rowhouse is still in the family.

Wernig and Kohlhepp Family in Guilford

Over 100 years ago, on October 22, 1918, two Baltimore natives of German ancestry purchased a house with ground rents at 3704 Greenmount Avenue on the eastern border of Baltimore’s Guilford neighborhood. The couple, Joseph Simon Wernig, Sr. and Caroline C. Hauhn Wernig, were the maternal great-grandparents of Edmond Francis Kohlhepp who presently lives in the same house. The Wernigs of 1918 had three children Mary Evelyn (Edmond’s grandmother), Harry Bernard and Joseph Simon, Jr. The property has remained occupied and in continuous ownership by a family member for 101 years. 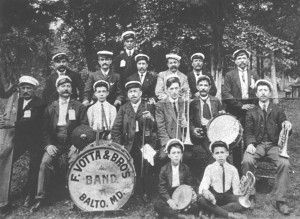 In 2009, we launched the Centennial Homes program by honoring the Pente Family who have lived on High Street since 1904. The honor was appropriately made with a memorable presentation at the 11th Little Italy Film Festival – a festival made possible by the movie projector placed in John Pente’s second story window. Mr. Pente passed away in July 2010 but his family continues to carry on his legacy of the film festivals in Little Italy.

In 2010, we welcomed the Oswinkle, Moran and Watkins family of Highlandtown into our Baltimore Centennial Homes Program during the neighborhood’s Salsapolkalooza festivities. In 2007, Lee Watkins IV and his wife, Diana Alonzo, purchased the family house in Highlandtown that had belonged to his maternal great-uncle. Although the house needed considerable work, the young couple has worked to restore it and keep it in their family.

In November 2010, Baltimore Heritage welcomed Mrs. Norma Schwarz Rist and her family into the Baltimore Centennial Home program at a small celebration she hosted at her home. The Rist family built the house that Mrs. Rist continues to call home in the Overlea neighborhood in 1905 when the area was largely wooded and family members drew water from a well in the back yard.

In December 2010, we welcomed Carol and Craig Martin into the Centennial Homes program at the South Baltimore Neighborhood Association monthly meeting in Federal Hill.  Carol and her first husband, Harry Warren Lowe, purchased the home he grew up in from this mother, Mary Lowe, who had lived in the house since 1894. Overall, four generations of Lowe and Martin Family members have passed through the front door of the two-story red brick row house on Charles Street. Many in the family have been active in South Baltimore, including Harry Lowe and wife Carol, who led an effort in the mid 1970s to re-route heavy trucks and buses that had caused buildings to collapse in the neighborhood.

On April 9, 2012, Ms. Jane Buccheri, President of the Hollins Market Neighborhood Association, joined our Centennial Homes Families.  Her maternal grandparents, the Cranes, purchased their house on Pratt Street in West Baltimore in 1891 where Ms. Buccheri presently lives and continues to call the family home.

For the City of Baltimore, seventy-two year old Barbara Baynes is not only an asset to her community but also a wealth of knowledge about all things Canton—she should be, she has lived here her entire life!

Roland John Moskal, the present owner of the family home on Fait Avenue in Canton, can proudly say the entire maternal side of his family since 1904 has lived a substantial part of their lives in his house.

Mary Alice Butts and her family have lived just north of Patterson Park since 1902. As coppersmiths, radio and television repairmen, and neighborhood activists, they have helped make the neighborhood and keep it vibrant.

In 2016, we were proud to add the eleventh Centennial Homes Family to our growing list: The Miller, Rapp, Blaney and McHugh family. Since 1916 (four years before Prohibition began), members of this clan have been stalwart parts of the community along Fait Avenue in what is today called Brewers Hill and back then actually had breweries brewing beer.

About the Centennial Homes Program

The following profile on Baltimore Heritage’s Centennial Homes program was written by Lisa Doyle for the National Trust for Historic Preservation publication Forum News in January 2010.

Baltimore’s Centennial Homes Program was born in 2005 when a local city councilman was knocking on doors trying to get elected. He came across a number of “little old ladies” who answered their doors and mentioned that they had been born in their houses as had their parents. James Kraft, now a councilman for a district near Baltimore Harbor, felt that there should be some way to thank these families that have long been a part of Baltimore’s historic neighborhoods. He initiated a partnership between the City of Baltimore and Baltimore Heritage, and the Centennial Homes Program began.

The program is modeled after the numerous state programs that honor agricultural properties that have been continuously owned and maintained in agricultural use by the same family for a century or more, such as those of Illinois, Michigan, Nevada, North Dakota, Tennessee, and Wyoming. Families may be recognized in ceremonies at the state fair, as well as with certificates or plaques and other publicity. Colorado’s Centennial Farm Program and Oklahoma’s Centennial Farm & Ranch Program both present an additional Historic Structures Award to farm and ranch families that have preserved four or more historic buildings (at least 50 years old) in conjunction with the land. The Georgia Centennial Farm Program gives special recognition to properties listed in the National Register of Historic Places.

Baltimore’s Centennial Homes Program gives this idea an urban twist. The focus of the program is on families and how they have contributed to their communities. The Centennial Homes houses are not grand or historically important, other than as part of the fabric of their historic neighborhoods. And Baltimore Heritage has emphasized the link between the family and neighborhood, regardless of the condition of the house. At the heart of the program are the people and their neighborhood stories.

The story of the first Centennial Homes family tells a lot about the program itself and what it can accomplish. John Pente, the 99-year-old patriarch of the Pente family in Baltimore’s Little Italy neighborhood, lives by himself in a quintessential Baltimore rowhouse. John’s father purchased the house in 1904 and John has lived in it since his birth in 1910. From this house, he wooed his future wife, raised his family, found work during the Great Depression, cheered for returning troops from both World Wars, saw new families join the neighborhood in different waves of immigration and others leave for homes in the suburbs, and experienced booms and busts of economic fortunes. Throughout all this, the family has stayed active in the neighborhood, from volunteering at church dinners to advocating sidewalk repairs. The Pente family has been part of the backbone that makes Little Italy a unique and thriving neighborhood.

For the past 11 years, John has allowed the Little Italy Film Festival, held outdoors on Friday nights in the summer, to project movies from a bedroom window of his home. It was only fitting that the official launch of the Centennial Homes Program honor the Pente family at one such Friday film night. Neighbors new and old came out to honor and thank the Pentes for their stewardship. Most viewers would not identify themselves as “historic preservationists,” but their support for the neighborhood and the Pente family proves otherwise. Perhaps the biggest surprise of the evening was learning that John’s great-niece recently purchased the house next door from her grandmother, John Pente’s sister. With a fifth generation of Pentes due to arrive soon, it appears this family’s commitment to the neighborhood will not fade any time soon. As Meredith Nagle, John’s great-niece, said:

“I just couldn’t let someone other than family buy the house that feels like a second home to me.”

There are now nearly a dozen Centennial Homes families identified in ten different neighborhoods across Baltimore, with new leads on possible 100-year owners coming in regularly. As we work to preserve our buildings and neighborhoods in Baltimore, the Centennial Homes Program helps us focus on an essential component: these unsung people and families, whose voices and daily efforts to care for historic communities cannot be forgotten.

Has your family or a family you know lived in the same house for over 100 years? If so, we would love to hear from you. For more information, Molly Ricks at ricks@baltimoreheritage.org.