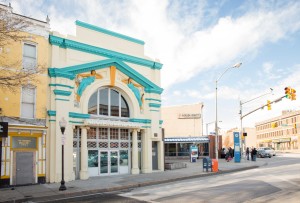 The restoration of the facade of the Arch Social Club, formerly the 1912 Schanze Theater, makes the building a star attraction along Pennsylvania Avenue. The work included removing the blocked-in opening in the lower portion and restoring the deteriorated concrete throughout. The newly restored facade sparkles at this key intersection in West Baltimore and stands as a bright reminder of the areas great heritage and future promise. 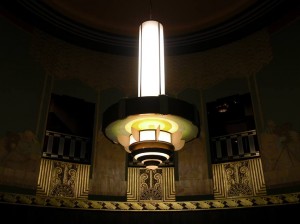 The Senator Theatre is an icon in Baltimore’s and one one of the city’s few historic landmarks on both its exterior and interior. The work on this 1939 building included restoring the main auditorium, the wonderful lobby with its terrazzo floor and wood paneling, and the original cinema tapestry mural, which was removed, repaired, and reaffixed in its original location. With three new additional movie auditoriums added and updated projection equipment throughout, the work has restored a Baltimore gem and given it life for years to come.

Located along one of the grand rows in historic Mt. Vernon, 1010 North Calvert Street involved a lot of work on a lot of great historic materials. The project included stripping and reusing windows and doors, plastering walls and ceilings, and installing new plumbing and electrical throughout the building. And that was only after the building underwent complete brick and stone restoration (including the stoop). Even the signature Queen Anne’s windows were retained and restored.

There was not a whole lot that could go wrong that hadn’t already happened for 207 North Castle Street. Located in the East Monument Historic District, the roof leaked, the doors and windows had been removed, the exterior walls were badly damaged and the interior walls (where they remained) were in terrible shape. The rehab work anchored the front facade, repaired the roof, installed new historically correct windows in the empty openings, and replaced joists and missing trim. The result is astonishing.

Award for the Restoration and Rehabilitation of 207 North Castle Street:
Skyline 2011-1, LLC, O’Connell and Associates

427 Drury Lane is a case study in careful restoration. The house had wonderful historic features but was in the unfortunately classic state of last having seen attention when Harry Truman was president. The work was remarkable for its light touch. The historic features were preserved and refurbished with little change other than the installation of central air conditioning. The owners, and project team, clearly valued the historic space.

Award for the Restoration and Rehabilitation of 427 Drury Lane:
Advanced Business Solutions

The work on this grand Bolton Hill house took it back from a multi-unit dwelling to its grandeur as wonderful single family home. Its conversion into apartments had thankfully spared many original details, including fireplaces, mantels, stairs, and crown molding. These were retained and repaired, as were the original front windows. With additional work to redo the kitchen and bathrooms, the house once again sparkles.

Award for the Restoration and Rehabilitation of 1817 Eutaw Place:
Pencor 09, LLC

This grand 1860s house in Union Square had a passable appearance on the outside, but the inside told another story. While there were great historic elements remaining, including a tin ceiling in the living room and a great stained glass transom light in the front hall, much of the interior was in poor shape. Without changing the floor plan, the owner and project team replaced non-historic windows with ones to match the originals, repaired plaster throughout, refishied the original heart pine floor, and installed a new kitchen and bathrooms where the existing ones were not habitable. The result is a great rowhouse that is as gorgeous on the inside as it is on the outside.

There was not a whole lot to speak of at 324 East Lafayette when the project started. The building was covered with formstone, all of the windows were missing, and the inside was a mess. The work included removing the formstone and restoring the original underlying masonry, installing new doors and windows made to match what was there originally (including the signature Baltimore bull nose frames), and restoring the marble steps out front. Where elements were missing (including the main stair and all of the interior doors), new ones were made to match, and the house was given new plumbing and electrical systems throughout.

617 Lennox Street was dubiously nicknamed the “Formstone Monster” in the Mount Royal Terrace Historic District in Reservoir Hill. It had sat vacant for over 15 years. The Druid Heights CDC acquired the home and undertook the restoration project to meet historic preservation standards and also return the open feeling of this unusually wide rowhouse. the bay window was restored, the formstone removed, and the facade restored. New wood trim was painstakingly created to put back some of the signature historic elements that now make this glorious house an appealing part of the neighborhood.

This 1862 historic house in the Mt. Washington Historic District is known by the name “Wayside.” It sits on 3 acres of land and has three stories, each 1500 square feet, along with numerous porches and 11 ft. ceilings. The extensive work included replacing a rotted roof, wood siding, and shutters. The stone foundation needed repair and the stone chimneys needed to be rebuilt. Even the original yellow pine flooring was retained and patched only where necessary. With a new kitchen and bathrooms, the 150 year old house again sparkles. 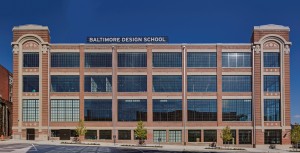 Originally built in 1914 as part of the Crown Cork & Seal Company to make bottle caps, 1500 Barclay Street spent many years as the Lebow Brothers Clothing Company until 1982 when it was vacated and sat empty. Its transformation into a public middle and high school is nothing short of remarkable. The work focused on creating a collaborative and progressive educational environment, using the historic building as the basis. The former loading dock is now an outdoor performance space for fashion shows. Salvaged equipment from the clothing factory is exhibited in the former freight elevator to honor the building’s previous life. And throughout, the industrial building shows off and acts as a foundation for a new generation of creative minds. 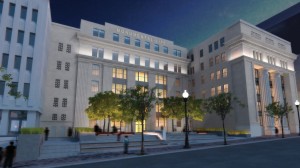 Chase Brexton Health Services purchased the 1928 Monumental Life Building in 2012 and by the end of 2013 had transformed it into a health clinic. The work included repairing the limestone exterior, even keeping and repairing the signature gold lettering spelling out “MONUMENTAL LIFE.” Original marble walls and floors were restored and imitation gold leaf ceiling was refinished using the original methods. An original wood-paneled 1928 board room was fully restored after having been subdivided into offices. At the end, the iconic Mount Vernon Building had not only found a new owner, but found a new life and promises to serve as a great asset for years to come. 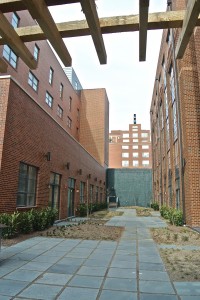 From Brewery to apartments, the reuse of the Gunther brewery complex is remarkable for its scope and quality. The work, which earned state and federal historic tax credits, included restoring the facade of the Romanesque Revival-style brewhouse with its decorative arches, pilasters and an elaborate corbelled cornice. The 1949 Stock House and another smaller brewhouse dating to 1950 were also restored. The complex now encompasses five buildings with 162 apartments and retail space and is at the center of the aptly named Brewer’s Hill neighborhood. 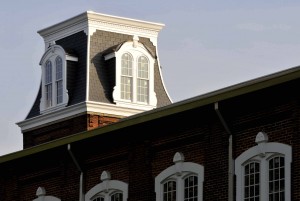 Straddling the Jones Falls River, Mill No. 1 is an adaptive reuse of 19th century cotton mill buildings, turning them into apartments, offices and restaurant space. Mill No. 1 was reconstructed in 1873 following a fire and was used as a cotton mill until 1972 when Life-Like Products, Inc. took over and made model trains and accessories, and later of Styrofoam coolers. The renovation work included installing windows in briked-in openings and re-installing a clerestory that runs the length of the mill and cupola to again allow in natural light. 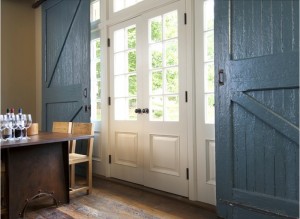 Originally a horse stable, the transformation of this 2200 square foot building is remarkable as much for its conversion into a residence as for its retention of historic fabric. The idea behind the conversion was to utilize the two-story turn of the century building and its rare pastoral setting within Baltimore City to create and comfortable living quarters. The project retained the historic stable doors, the stairs and windows, and even decorative elements like coat hooks take on the stable theme. The result is a warm residence with decidedly country flavor.

Award for the Adaptive Reuse of a Former Stable into a Residence:
Anonymous Owner, Rohrer Studio 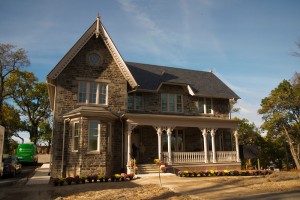 The award for this project is not just for the restoration of a building. It is more accurately for the resurrection of a place given up for dead. The Superintendent’s House in Druid Hill Park dates to 1872 and when the Parks & People Foundation got the building in 1995, it was a pile of ruins. Multiple fires had destroyed the roof and almost all of the interior and trees were literally growing through the windows. The restoration work replaced stones, created a new roof and supporting structure, and added back gutters, downspouts, chimneys and the front porch. Now brought back from the dead, the building is part of a new campus for Parks & People.