The oldest Catholic Seminary in the U.S.: St. Mary’s Seminary for the Holidays 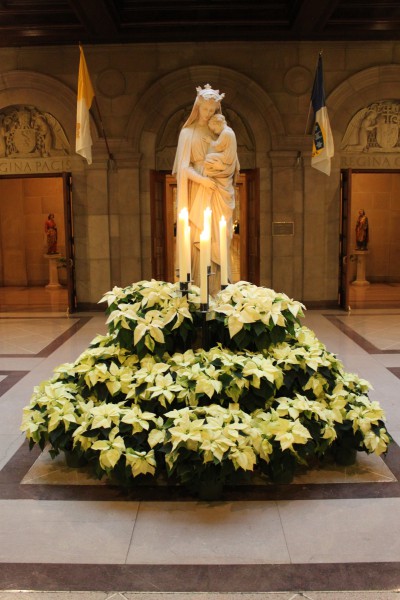 If you have ever wondered about the large building on Northern Parkway between the Jones Falls and Roland Avenue that so many of us drive by every day, it is the home and active hub of the nation’s oldest seminary. Founded in 1791, St. Mary’s Seminary and University was the first Catholic seminary in the United States. It was granted a civil charter by the State of Maryland in 1805 and in 1822, Pope Pious VII established it as the first seminary in the U.S. to grant ecclesiastical degrees, which it still does to this day. Originally on Paca Street, the seminary moved to its present location in Roland Park in 1929. This massive building, designed by Boston architects Maginnis and Walsh, has a classical entrance and just inside stands a statue of Mary, the patroness of the seminary. The sculpture is called Sedes Sapientiae, or Our Lady Seat of Wisdom. The main chapel, fitted in marble and oak, contains a Casavant pipe organ and stained glass windows imported from Paris. And within these walls, seminarians eat, sleep, pray, and receive their training. Please join us in the holiday season for a tour of this wonderful building with our hosts, the Sulpician Fathers of the seminary.